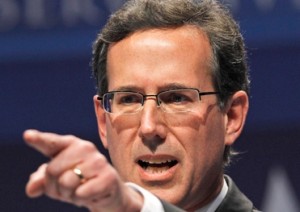 Politico reports that Rick Santorum has contacted Google over the sexually explicit search results that come up when you enter his name through the website. “I suspect if something was up there like that about Joe Biden, they’d get rid of it,” Santorum said. “If you’re a responsible business, you don’t let things like that happen in your business that have an impact on the country.”

“To have a business allow that type of filth to be purveyed through their website or through their system is something that they say they can’t handle but I suspect that’s not true.”

The vulgar search results began showing up several years ago after sex columnist Dan Savage started a “Google bombing campaign” against the former Senator after he had made anti-gay remarks to a reporter.

A Google spokesperson responded to Santorum by advising that users who want “content removed from the Internet should contact the webmaster of the page directly.”

Google’s reaction to Santorum’s conundrum was tepid compared to the response it had to a racially offensive photo search result of Michelle Obama in 2009. On that occasion, the search engine temporarily took down the image, before reversing itself, leaving the image up with an apology attached: “Sometimes Google search results from the Internet can include disturbing content, even from innocuous queries. We assure you that the views expressed by such sites are not in any way endorsed by Google.”

Here are the current search results that appear when you do a search of Rick Santorum’s name: 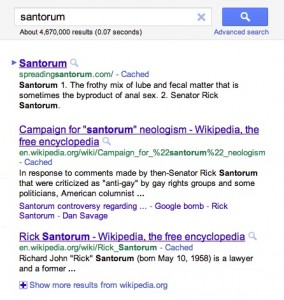