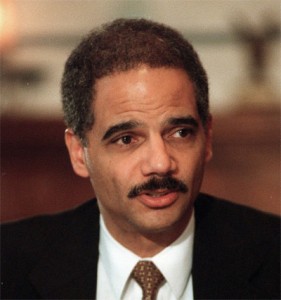 U.S. Attorney General Eric Holder told the European Parliament Tuesday that the Obama Administration really is trying to close the much-maligned U.S. prison in Guantanamo Bay “as quickly as possible, recognizing that we face substantial pressure.” Having so far elapsed the intended close date, he promised they are still working on it and will continue to do so until all of the prisoners are processed or moved or someone else gets voted into office. Eventually, it will get done. Is this just further deflection of responsibility for action not (yet) taken?

Guantanamo has been a thorn in the administration since the very beginning. Just two days after taking office, Obama signed an executive order instructing the CIA to close down secret overseas prisons and the Pentagon to close down the prison at Guantanamo Bay within the year. “This is me following through on not just a commitment I made during the campaign,” he said at the time, “but I think an understanding that dates back to our founding fathers, that we are wiling to observe core standards of conduct, not just when it’s easy, but also when it’s hard.” The motion was heralded as the dawning of a new era in national security programming and the end of a shameful chapter in American history. The priority given to the site’s closure, however, quickly faded, and administration has since had a difficult time making good on its early-term promise.

During his address, he urged those eager to see the prison closed to remember that the Administration has managed to make a “fundamental break” from most of the “enhanced interrogation” techniques that had been used and criticized as torture. Which is a start. He also offered that, “Some people have made this a political issue without looking at, I think, the real benefits that would flow from the closure of the facility.” Better late than never, so long as it gets done eventually.

This update marks a slight pivot in Obama’s presidential narrative; a narrative that in many ways began on that second day of his term when he signed the presidential directive ordering the site’s closure — a move intended as a symbolic break from the Bush ways. Moreover, Holder’s assurances seem unlikely to satisfy those who have long been pushing for the prison’s closure, and even less so to the detainees who have been held there for over a decade now, many innocent and many more without much hope of seeing trial anytime soon.