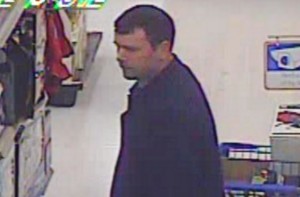 Whoever runs the Warwick, Rhode Island police department’s Facebook account had great fun yesterday informing the public about a nefarious “Valentine Vandal” who made off with some tools two days before Valentine’s Day.

Their Facebook post says, “This is a perplexing time for the male half of humankind. I know because I myself have stood in front of the card rack with that zombie stare, paralyzed and unable to even pick out a card. Never mind any decision beyond that.”

Which leads to the vandal, who apparently went into a Walmart and picked up a bunch of tools, only to steal them. Here’s how the PD explained it:

He decided to get his partner in marriage power tools-like welders, impact guns, etc. While the wisdom of gifting tools to one’s wife has been debated for centuries, the prudence of his next decision is not debatable. He decided to steal them. Yup. Hid the tools right in a stainless steel gift box shaped like a trash can and walked right out the store.

Now I am sure if any woman were given power tools by her man on Valentine’s Day she would love to turn him in!

So this last weekend was for romancers and secret admirers. You know-Valentine’s Day-that time of the year where we all…