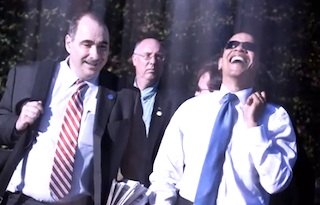 The Republican National Committee is appropriating the Democrats’ “war on women” attack line and throwing it back in their opponent’s faces — jujitsu-style — with a new ad that features footage of female media personalities grilling the Obama administration over Bill Maher and his controversial remarks about women.

CNN’s Erin Burnett plays a star role in the new ad, with a clip of her holding chief Obama campaign strategist David Axelrod‘s feet to the fire over Maher calling Sarah Palin the c-word. “As a woman who’s a public figure,” Burnett says, “if someone called me a c-word, I would–” “Listen, Erin! Erin!” Axelrod contests, as the camera zooms in on his sweaty brow.

“Understand that these words, that uhhh, uhh…” Axelrod nervously stammers in the ad. “…Maher has used in his standup act — uhhh — are a little bit different.”

The ad then immediately lands an attack to the jugular with a photo of a smug-looking Obama and Axelrod laughing it up (A Bill Maher joke, perhaps?) as a voiceover quotes Ron Suskind‘s book Confidence Men calling the Obama White House a “boys’ club.”

Various damning quotes from the controversial book Confidence Men are read, including excerpts that “women are talked over and effectively sidelined.”

With this new ad, Republicans demonstrate they are not afraid to turn the tables on President Obama over women’s issues.