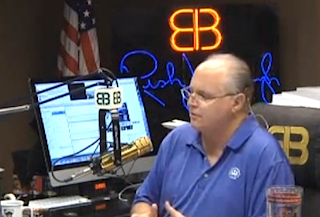 Everyone has a theory about what happened to Malaysia Airlines flight 370, which disappeared a week ago and has yet to be found by the world’s best search teams. While most believe that it was either mechanical failure or hijackers (of course, all speculation at this point) that took down the plane, Rush Limbaugh has another theory. And, of course, he’s not afraid to share it.

“Let me try this theory on you,” Limbaugh told his radio audience Friday morning. “How about the jet is flying along and you have a total electronic failure but the engines keep working?” Insisting that his “guess is as good as any,” Limbaugh admitted, “I don’t know if this is possible, given electronic ignition and all that, but let’s say it is.”

“So then the crew says, ‘We got to get back home. We got to get back to Kuala Lumpur. We can’t fly with no electronics,'” Limbaugh continued, setting the scene. “It’s dark, nighttime. They fly over a bunch of unfriendly countries, and they can’t identify themselves, and they’re not identified, there are no lights on. There’s been a total electronic failure. What if some hostile country flew up there and shot it down and then discovered their mistake and nobody wants to admit what happened?”

It may seem farfetched, but with a lack of answers from all those aviation experts appearing on CNN 24/7, amateurs like Limbaugh are bound to start thinking up some off-the-wall alternatives. “Is my theory as good as anybody else’s that you’re hearing out there?” the host asked. “Yeah. I think my theory holds up, and it works well.”