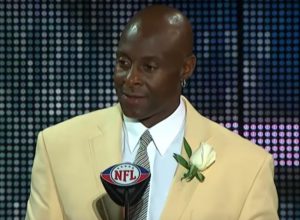 “I support @Kaepernick7 for bringing awareness for injustice !!!” The NFL Hall of Famer tweeted Tuesday. “As Americans we all have rights! Im hoping we all come together#solution.”

I support @Kaepernick7 for bringing awareness for injustice !!!! As Americans we all have rights! Im hoping we all come together#solution

This follows a tweet from Aug. 30 in which Rice criticized Kaepernick, urging him not to “disrespect the flag.”

All lives matter. So much going on in this world today.Can we all just get along! Colin,I respect your stance but don’t disrespect the Flag.

Rice’s reversal comes at a time in which Kaepernick’s protest has gained support throughout the NFL. At least one-quarter of all teams in the league now have one or more players engaging in some form of National Anthem protest.

And more may soon join. Rashad Jennings of the New York Giants told Newsday that the death of Terrence Crutcher — an unarmed black man who was shot and killed by Tulsa, OK police — may prompt several Giants to protest.

“Privileged people need to defend and actually voice out, not the oppressed,” Jennings said. “That’s just complaining. The people who are privileged need to voice it themselves and say: ‘This isn’t right.’ That’s what Kaep’s doing, that’s what a lot of people are doing. That’s what my whole conversation with Kaep was about, understanding where he’s coming from. And I support that 100 percent.”