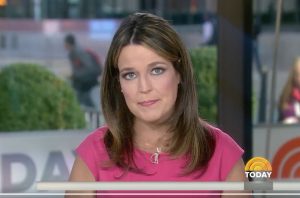 This morning, as expected, Billy Bush will not be on air during TODAY’s third hour after being suspended by the network for his role in the leaked audio from 2005 that cast a dubious cloud over Donald Trump‘s candidacy over the weekend.

The leaked audio from Friday by The Washington Post reveals a presumably off-the-record conversation picked up on a hot mic while Trump was doing an interview for Access Hollywood. Bush, then a Hollywood host, can be heard engaging in lewd back-and-forth with the real estate icon — “locker room talk” as it was eventually described.

“We want to note one other thing. Pending further review of the matter, NBC News has suspended Billy Bush, the host of TODAY’s third hour, for his role in that conversation with Donald Trump,” Savannah Guthrie simply said.

Dear TODAY Family — I know we’ve all been deeply troubled by the revelations of the past 48 hours.

Let me be clear — there is simply no excuse for Billy’s language and behavior on that tape. NBC has decided to suspend Billy, pending further review of this matter.

If any of you have any questions or concerns please reach out to me directly, anytime day or night.

Though this begs the question that many have been asking today… the tape is far more incriminating for one of the men who appear on it: Donald Trump. He is, after all, the one who says the infamous line, “Grab ’em by the pussy,” and talks about advancing on women simply due to his power and stature. Bush, if anything, is a juvenile accomplice to some of the guy-banter, commenting at most on the looks of a woman. Yet one of these men wakes up this morning suspended from his job, while the other could be 30 days away from being called Mr. President Elect of the United States…