‘Scaramucci is Dumb as a Rock’: Twitter Weighs in On CNN’s Scaramania 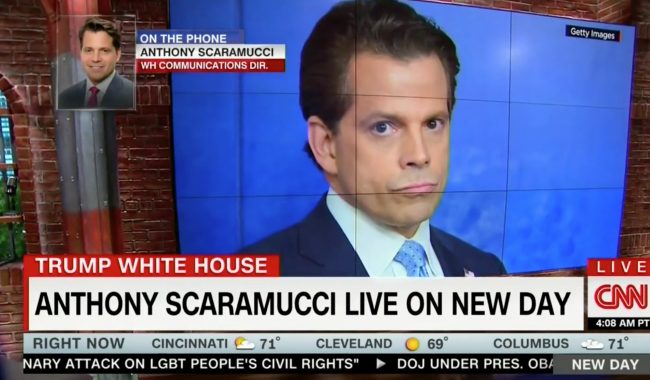 Did the call go off the rails? Depends who you ask.

What did transpire is that Scaramucci compared leakers to fish rotting at the head (presumably a swipe at Reince Priebus) while at the same time insisted his relationship with Priebus was brotherly (like Cain and Abel) He added that he had no problem with certain types of leaks.

You know it was nuts because during the whole exchange someone from the White House actually texted Bloomberg reporter Josh Green just before his own appearance on New Day to liken it to a “car crash.”

The moment is the latest chapter in the biggest story of the last few days: The Reince-Scaramucci war. Twitter had quite a lot of feelings about that.

Check it out below.

I try not to overuse phrases by @POTUS, but sometimes I can’t help it. Below is more evidence @Scaramucci is dumb as a rock. @Reince45 https://t.co/kFs9iqxscs

Penn State is still recovering from his “honor” pic.twitter.com/M7UsrJ6lhc

Trump extorting Murkowski to get her to deny health care to millions https://t.co/2uodWrsSfl

Scaramucci is the epitome of Trumpism, dominance games, aggression, but based on ignorance of basic facts abt public document requests.

This thread is BONKERS. Either the Mooch day-drinks or he’s involved in some sort of dare. Hell, maybe both. https://t.co/Ud2qzsrRaI

Mooch’s chosen enemy is the White House Chief of Staff and liberals are passing the popcorn not crying. https://t.co/XPbEpNQyXh

Mooch is an idiot, and totally out of his element. There’s no way he’s going to survive at the WH for long. I give him 6-8 weeks – at most.