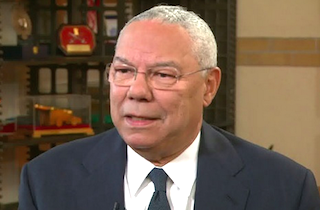 Republicans have been jumping all over a report from The New York Times that claims Hillary Clinton exclusively used a personal email account to conduct business while serving as secretary of state for the Obama Administration. But now, it turns out that at least one of her predecessors from the Bush Administration did the same.

In a statement to Politico, an aide to Colin Powell, who served under President George W. Bush from 2001 to 2005, confirmed that he too relied on a personal email account and did not know of any rules preventing him from doing so.

The statement from Powell’s camp reads:

He did not take any hard copies of emails with him when he left office and has no record of the emails. They were all unclassified and mostly of a housekeeping nature. He came into office encouraging the use of emails as a way of getting the staff to embrace the new 21st information world.

The account he used has been closed for a number of years. In light of new policies published in 2013 and 2014 and a December 2014 letter from the State Department advising us of these polices, we will be working with the department to see if any additional action is required on our part.

This precedent was acknowledged by a Clinton aide, who responded to the Times report by saying, “Like Secretaries of State before her, she used her own email account when engaging with any Department officials.”

RELATED: Nobody Can Figure Out Whether Hillary Broke the Law with Personal Email Account

As for Powell’s successor, Condoleezza Rice, a source close to her told Business Insider that she did not use a private email address during her time in Bush’s cabinet, but that may have been because she “barely used email” at all.

However, in another statement released Tuesday to that same site, State Department Deputy Spokesperon Marie Harf said Clinton’s successor, John Kerry is “the first Secretary of State to rely primarily on a state.gov email account.”