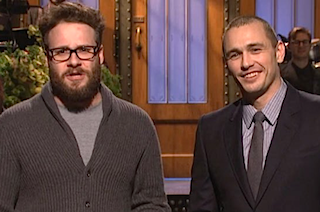 Actors Seth Rogen and James Franco have abruptly canceled all press appearances to promote their upcoming movie, The Interview, in the wake of the Sony hackers threatening a 9/11-styled terrorist attack on theaters screening the film.

The two have officially canceled their joint appearance on the Tonight Show Starring Jimmy Fallon, scheduled for tomorrow night, December 17, a network spokesperson confirmed to Mediaite on Tuesday afternoon. The news follows a report from BuzzFeed that the pair has canceled all press appearances leading up to the Christmas release on their film The Interview after threats were made by the group that hacked Sony Pictures in retaliation for the film.

Variety confirmed the reports, and noted that while Rogen and Franco will appear at a special New York screening of The Interview on Thursday, the duo will not make any more promotional appearances leading up to The Interview‘s release date.

Earlier today, the hackers known as the Guardians of Peace released an ominous warning to all the movie theaters planning to screen the movie on Christmas Day: “Remember the 11th of September 2001,” they wrote. “We recommend you to keep yourself distant from the places at that time. (If your house is nearby, you’d better leave.) Whatever comes in the coming days is called by the greed of Sony Pictures Entertainment.”

They also promised a “Christmas gift” in the form of files named after Michael Lynton, the CEO of Sony Pictures Entertainment.

The contentious film mocks the government of North Korea, taking aim in particular at dictator Kim Jong-Un, played by comedian Randall Park. It’s believed that North Korean-sponsored hackers are behind the retaliatory Sony leak, which revealed employees’ sensitive financial information, as well as a slew of embarrassing emails sent by Sony executives. While the government denied that they were behind the attacks, they praised the hackers for their “righteous deed.”