So The Wall Street Protests Are Super Popular, But Will That Last For Long? 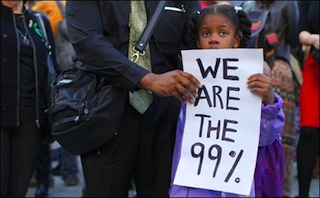 Apparently America likes their tea to be herbal. At least that’s what a new poll from Time Magazine shows. The country-wide poll finds that Americans have a strongly positive view of the Occupy Wall Street movement, much more so than that of the Tea Party.

I guess people really do like hippie, Marxist, mass-murderers after all. But why?

“The survey also revealed that respondents have a better impression of the left-leaning protest movement known as Occupy Wall Street than they do of the Tea Party movement. Fifty-four percent of respondents harbor a positive view of the burgeoning protest movement, well above the 23% with a negative opinion. By contrast, just 27% of those surveyed have favorable views of the Tea Party, while 65% say its impact on U.S. politics since its inception in 2009 has been negative or negligible.

Those results reflect a strain of economic populism common to the new movement’s backers. Among those respondents familiar with Occupy Wall Street, nearly 80% argue the wealth disparity in the U.S. has grown too large and 68% say the rich should pay more taxes. Even so, this cohort is aware of the challenges facing the movement. Fifty-six percent predict Occupy Wall Street will have little impact on American politics, and another 9% say its effect will be negative.”

So what does this mean? Well, in this writer’s admittedly useless opinion, it probably just means that the new protest movement hasn’t been co-opted by a political party yet.

People like populist protest movements. As much as those shouting about “class warfare” might not like it, Americans do think the rich have gotten too rich. As a nation, we like capitalism but we believe in the idea of “fairness” more. Hell, you can boil a lot of the differences between “liberalism” and “conservatism” down to a mere disagreement on the definition of “fair.” So, when it seems like the “successful” people are merely gaming the system, yeah, the country is going to support a movement to stop them.

You know what people don’t like? Political parties. Especially the other political party. Back when the Tea Party first started and was more of an amorphous, vague thing, the national feelings were probably very similar to this. However, once people like Sarah Palin got involved, the movement seemed much more like an arm of the Republican Party to those on the outside. Whether or not you agree that it is is unimportant, that’s what it looks like.

It didn’t help that there was a strong anti-Obama vibe from the beginning. Meanwhile, the OWS movement has the less political bogeyman of “rich bankers.” Sure, the groups in the park are obviously left-leaning but, to people on the street, the phrasing from the Time pollsters, “A GROUP OF PROTESTORS [who have] BEEN GATHERING ON WALL STREET,” doesn’t initially scream out “Democrat” or “Republican.” Therefore, it doesn’t initiate any flash judgement. No one’s worried about going against “their team.”

Right now, conservative media figures are unsurprisingly trying to demonize the Wall Street protesters. However, their accusations that the people are “dirty hippies” or “revolutionaries.” Doesn’t seem to be having much of an effect. In my opinion, the people who will do the most to turn portions of the country against this movement are the left-leaning media figures trying to claim the group as their own. They want this to be the liberal Tea Party, however, every time they say that, it makes it sound like the Democrat Tea Party. Once that happens, you can watch these poll numbers start to drop.