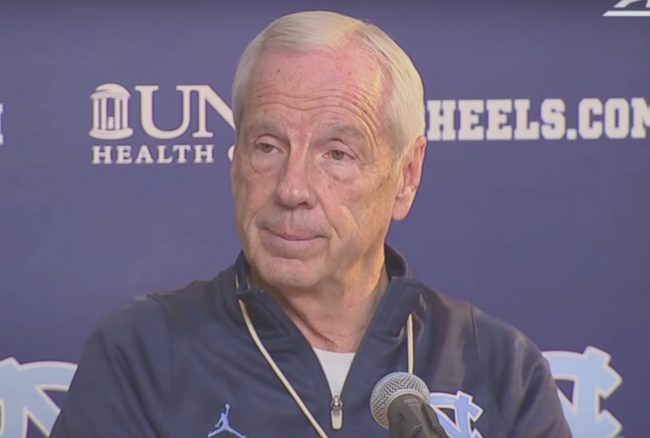 After a years-long probe into an academic scandal at the University of North Carolina — in which hundreds of student athletes registered for sham courses and received phony high grades — the NCAA announced Friday that the school would not be punished.

“While student-athletes likely benefited from the so-called ‘paper courses’ offered by North Carolina, the information available in the record did not establish that the courses were solely created, offered and maintained as an orchestrated effort to benefit student-athletes,” said Greg Sankey, the commissioner of the Southeastern Conference — who headed an NCAA panel looking into the scandal.

Essentially, the NCAA concluded that there probably were sham courses at the school, but they weren’t exclusively for athletes. And so even though athletes “likely benefited,” the NCAA opted not to punish the university

The ruling has been met with widespread outrage from fans and journalists. Pat Forde of Yahoo wrote, “The governing body of college sports is useless when it comes to policing itself. Mall cops think the NCAA is soft on crime.”

Here’s some more of the largely irate reaction from sports Twitter:

UNC ruling another reminder that the NCAA exists to: 1. Sell March Madness TV rights; 2. Enforce cartel amateurism; 3. Nothing else.

Boise State got punished for letting freshmen sleep on players’ couches before they were enrolled. … UNC 2 decades academic fraud: Nada.

If I ever need a lawyer, I’m getting whoever UNC got https://t.co/1pJE1RtKMJ

UNC paid more than $18 million in legal fees in their academic scandal case.

It was worth it.

What do UNC athletes and 99% of UNC fans have in common?

Committee on Infractions “could not conclude” that violations were committed by UNC. Eighteen years of academic fraud gets a pass.

UNC successfully convinced the NCAA that it’s not their athletics that were rotten, but their academics. Well done!

SMU got a tourney ban bc one player cheated in one class, then left school. Entire University of North Carolina was cheating and got nothing

Memphis got popped for something called “strict liability” and the NCAA let years of academic fraud at UNC go totally unpunished. Shameful.

NCAA says UNC academic fraud is not a violation.

Unless the NCAA changes its rules, it’s giving universities a playbook on how to cheat.

Does the NCAA still want us to call ‘em STUDENT-athletes or nah?

The fact that the NCAA didn’t find fault with UNC about academic fraud is a telling moment. Pay players is a no/no don’t educate…that’s ok

Memphis got popped for something called “strict liability” and the NCAA let years of academic fraud at UNC go totally unpunished. Shameful.