The Economists Paul Ryan Cited in His Anti-Poverty Report Would Like to Be Un-Cited, Please
SCHOLARSHIP

The Economists Paul Ryan Cited in His Anti-Poverty Report Would Like to Be Un-Cited, Please 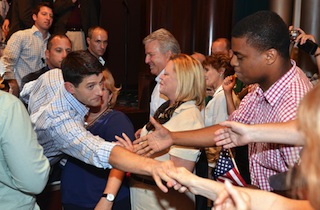 Paul Ryan turned out to be something of a drag on the 2012 Republican presidential ticket, but he never lost his Beltway-specific status as the GOP’s Head Wonk. This “serious” image is greatly helped, as Jonathan Chait points out, by the fact that Ryan “ventures outside the world of right-wing pseudo-scholarship and actually attempts to engage with mainstream economic analysis” — as in his just-released report on anti-poverty programs, which cites scores of scholarly papers.

The problem: “mainstream economic analysis” and Ryan’s policy goals (gutting the social safety net and redistributing funds to the wealthy via tax cuts) are often at odds, as the authors of those papers were all too eager to point out this week. The Fiscal Times rounded up a half-dozen scholars who called Ryan out for misrepresenting their research, by distorting their conclusions, eliding the mitigating factors of the findings, or flat out screwing with their data. In one case, Ryan simply ignored a portion of the war on poverty:

“One of the study’s authors, Jane Waldfogel, a professor at Columbia University and a visiting scholar at the Russell Sage Foundation, said she was surprised when she read the paper, because it seemed to arbitrarily chop off data from two of the most successful years of the war on poverty.

[snip] “The Columbia researchers found that, using their model of the SPM, the poverty rate fell from 26 percent in 1967 to 15 percent in 2012. Ryan only cites data from 1969 onward, ignoring a full 36 percent of the decline.

“’It’s technically correct, but it’s an odd way to cite the research,’ said Waldfogel. ‘In my experience, usually you use all of the available data. There’s no justification given. It’s unfortunate because it really understates the progress we’ve made in reducing poverty.’”

Others were not so generous. One economist criticized Ryan for using his research to marry a decline in child poverty to welfare reform, when the actual paper credited a confluence of policy and economic factors. Another said Ryan flat out misstated her research on the relationship of housing vouchers to the labor market, by a statistically significant degree, and then articulated a reductive version of her conclusion. And so on.

As Chait argues, massaging the research isn’t an accident or a result of sloppy scholarship, but structurally necessitated by Ryan’s ideological mandates. If Ryan wants to balance the budget in the next decade while cutting taxes without touching defense spending or current retirees’ benefits, the cuts must come from social programs. Therefore, the data must support the cuts.