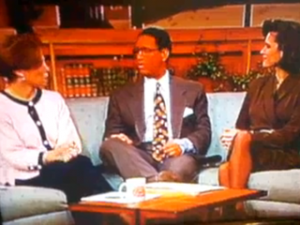 If this is true, it’s very sad. Last week, an amazing video from 1994 was posted online showing Katie Couric and Bryant Gumbel sitting on the Today set and trying to wrap their heads around this whole “Internet” thing. The video instantly went viral and was posted on countless websites (including Mediaite). Well, now it would appear that the guy who posted it has been fired by NBC for leaking it.

Not too much is known at this point but, a couple days ago, The Washington Post’s Rob Pegoraro tweeted this message:

Today, TechDirt reported on the situation, saying “the guy doesn’t want to talk about it beyond that, and NBC doesn’t appear too keen on commenting on the whole situation.” I certainly hope that, if this guy really got fired, then this wasn’t the reason.

Sure, the man was probably breaking his employee contract by leaking NBC-owned property (having worked a couple of very low level jobs in television, I know how strict and specific those contracts are and I understand why) but this video deserved to be out there. I don’t want to suddenly start sounding like Julian Assange all of a sudden, but people deserved to see it. Yes, the first reaction upon viewing the video was to laugh at how dumb the hosts sound to our 2011 ears, but most people will recognize, after thinking about it, that this video is one of the best proof of just how far our society has come in recent years. When you watch that video, you can’t help but realize that there are millions and millions of things that we take for granted that used to be absolutely impossible and you can’t help but feel proud for the human race. And, as we all know, that’s not something we get to do that often.

I know this sounds completely pretentious, but it’s true. That video, silly as it may seem, is important.

We have no way of knowing the reasons this guy got fired (or if the story’s actually true), but, if his only infraction was posting this one video, we hope NBC reconsiders.

Check out the video in question below: