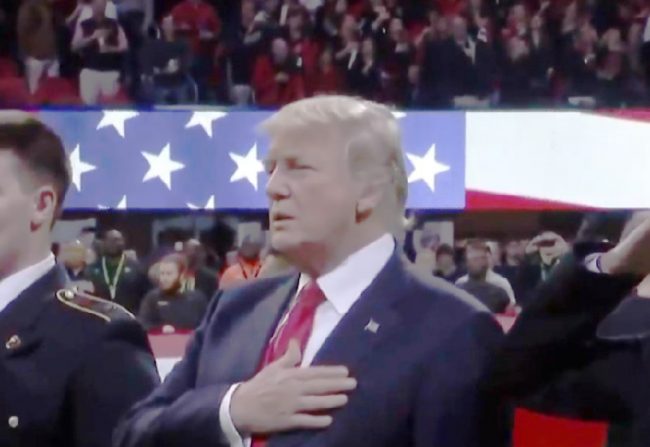 Prior to the start of tonight’s college football championship game between Alabama and Georgia, President Donald Trump took to the field to participate in the pregame singing of the national anthem.

Considering that the president has made a really big deal about athletes showing respect during the playing of the Star-Spangled Banner, this presented the opportunity for Trump to stand on a football field, look towards the US flag with his hand on his heart, and sing along confidently as the anthem played.

So, is that what happened tonight? Well, take a look for yourself:

As the video shows, Trump seemed to mouth some of the words to the song, but kept his mouth shut during other parts. With television cameras focused solely on him, and millions viewing around the country, Twitter soon went in on the possibility that the president doesn’t actually know the lyrics.

Trump’s been trying to get football players fired for kneeling during the National Anthem and this man can’t even mumble it on national television right lmfao https://t.co/lW7ytHarLM

When asked about the national anthem, Trump should say that if Kendrick Lamar can lip-synch badly in public, so can he.

Trump was mouthing some words during parts of the national anthem, but it was unclear what he was saying. He didn't open mouth during other parts.

After all that, does Trump even KNOW the words to the national anthem.

I would wager that Trump could not sing the national anthem nor recite pledge of allegiance if his life depended on it. He’s a phony from his Just For Men weird hairdo to his draft dodging spurred heels. https://t.co/54ABKgBoXE

Super obvious Trump doesn’t know the words to our National Anthem. Disgraceful for any president, but particularly bad given his months of race-baiting rants against NFL players kneeling to demand justice. pic.twitter.com/jUD0hBqo9N

Trump couldn’t even remember the words to the National Anthem tonight. But yeah, there’s nothing wrong with his mind. https://t.co/QPhcAJZayO

Trump not knowing the words to the national anthem exposes his "patriotism" schtick like his "two Corinthians" exposed his biblical hypocrisy.

Seeing Trump sing the National Anthem reminded me of this? https://t.co/cvPWTLghDT

Oh how I love you, @eddieizzard.

You know who knows the words to the National Anthem?

"President Trump flawlessly recited the national anthem better than any President ever!" pic.twitter.com/hoYXWsPlRW