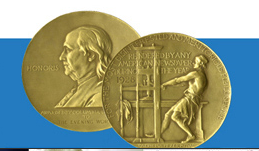 The 2010 Pulitzer Prizes have been announced and no, the National Enquirer did not win for its intrepid reporting of the Edwards’s seemingly endless scandals. Here’s who did win.

The Washington Post won four awards, the most this year. Kathleen Parker won the award for commentary; Sarah Kaufman won for criticism [dance], a WaPo magazine article by Gene Weingarten that once you read you will not forget won the prize for feature writing, and Anthony Shadid, a, according to the NYT, longtime Iraq correspondent, won for international reporting. Shadid, by the way, now works for the Times, and has previously won the prize for his Iraq coverage in 2004.

Full list of winners below…you will likely note that in a year during which financial stories took center stage, the WSJ was shut out (again).

• Investigative Reporting: Barbara Laker and Wendy Ruderman of the Philadelphia Daily News and Sheri Fink of ProPublica, in collaboration with The New York TImes Magazine