The Self-Awareness Dilemma: Can A Post-Famous Jersey Shore Still Be Great? 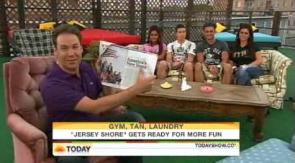 We’ve reached a point in our reality TV consumption where we no longer need to actually believe it is real – the suspension of disbelief for shows like The Hills or Real Housewives is as accepted as in professional wrestling.

But what separated MTV’s Jersey Shore when it beat the beat onto the scene in December was how fantastically real it was. As we await the second season premiere tonight, let’s hope this hasn’t changed.

At the time I called it the “worst best show of all-time”: “Everyone can be famous for nothing – and that now includes, fake-tanned, uber-egocentric, unbelievably dense ‘guidos’ and ‘guidettes.'”

And now they are famous – more than anyone could have predicted after episode #1. But with the fame comes the realization we no longer may get a reality TV show. And for Jersey Shore that could spell disaster. The struggle here is simple: in season one these were some of the least self-aware people ever put on TV. Self-awareness will ruin this show, as it tends to have a habit of doing.

The cast of Jersey Shore has been doing some promotion for the new season, but they’re busy shooting season three so the cast isn’t everywhere. In fact, Morning Joe‘s executive producer Chris Licht revealed today he asked the crew for an interview this morning and they…passed. Erin Burnett echoed the same sentiment regarding an appearance on CNBC when they were at the NYSE yesterday.

But they were on the Today show this morning, incomprehensibly joined by correspondent Jeff Rossen on the roof of the season one Petri dish of a shorehouse. Rossen intro’ed the segment, gave a brief tour of the surroundings (‘this is the hot tub where…aaand moving on’) and tossed to Matt Lauer for the interview.

What followed made me nervous.

Compare the interview below to February’s appearance by the gang of GTL’ers. Just days after the finale of season one they were still fun and awkward. Today we met Mrs. Snooki and Mr. Pauly D. The cast echoed ‘we’re just happy to be here’ with each reference to salary. Lauer asked them about the criticism from Gov. Chris Christie. “If we can help out the pockets of New Jersey that’s a bonus for us,” said Vinny (the politician).

Will they play up conflict for the cameras? “We just come out here and have a good time,” said Snooki, fairly unconvincingly.

Maybe they’ve just gotten more PR-savvy. They have a lot more riding on the way they are perceived, and the pressure to remain believably famous must be excruciating. Hopefully once the Ron-Ron Juice is flowing and the hot tub is crowded, the awareness-abandonment returns. We’ll begin to find out tonight.

And if not – since they’ve gone and taken their, um, talents to South Beach this season, maybe they can pass all their newfound self-awareness to the person who needs it the most – LeBron James.