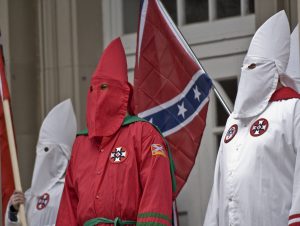 A New York advertiser is taking it upon himself to make sure that the “alt-right” never becomes normalized in the public consciousness.

“George Zola” is the alias of a web professional who spoke with Huffington Post about his new a Google Chrome extension, “Stop Normalizing The Alt Right.” The app works by automatically taking out all mentions of “alt-right,” and replacing the term with “white supremacy.”

“I don’t want this term to be sugar coated, I want it to instantly make [people] recoil in the same way most recoil when thinking of white supremacists or white nationalists groups,” said Zola. “They’re scary, dangerous, and it’s important we stop the normalization of this before it gets out of hand. History shows us how quickly these movements can spiral out of control.”

According to the extension’s website, the app’s purpose is to prevent white nationalist sentiment from being sanitized. Zola said that that he created the app to show unity with minority groups who have faced increased abuse in the current sociopolitical climate.

The alt-right has been tied to Donald Trump‘s rise, with the rationale that the President-elect’s inflammatory rhetoric has emboldened Neo-Nazis and white supremacists who support him. Various news figures have started debating about whether Trump’s antics will cause fringe and objectionable viewpoints to go mainstream.

“Lots of politicians use coded language & dog whistles to appeal to people’s racism,” said Zola. “But Trump was more brazen and open about it than any major candidate in recent history, and for him to prevail with these tactics is a scary precedent.