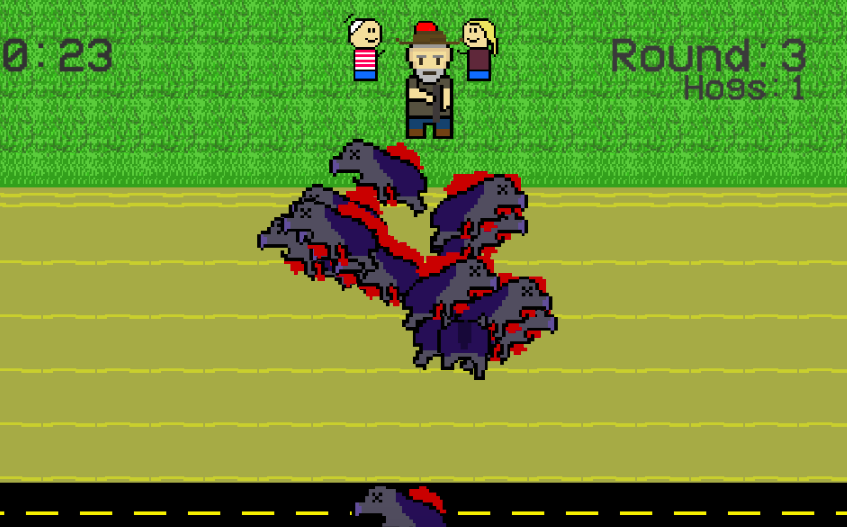 After a gun control debate on Twitter spawned a viral meme based around the phrase “30-50 feral hogs,” an independent developer has created an interactive online game that allows players to defend their children from swarms of the animal pests.

The feral hogs meme first gained popularity on Sunday after Twitter user @WillieMcNabb invoked the husked beasts while arguing against banning semi-automatic rifles, as he claimed the powerful firearms are necessary to “kill the 30-50 feral hogs that run into my yard within 3-5 mins while my small kids play.”

Legit question for rural Americans – How do I kill the 30-50 feral hogs that run into my yard within 3-5 mins while my small kids play?

McNabb wrote the tweet after alt-country singer Jason Isbell tweeted, “If you’re on here arguing the definition of ‘assault weapon’ today you are part of the problem. You know what an assault weapon is, and you know you don’t need one.”

Advertised as the game that allows anyone to “protect your 2 children from 30-50 feral hogs within a 3-5 mins time limit,” the Feral Hogs the Video Game came out on Tuesday afternoon, as the feral hogs internet phenomena was receiving recognition at outlets like GQ, CNN, the Washington Post, and ABC.

Instructions are easy, your whole family can play, even your 2 children! Big thanks to @book81able for developing this overnight. https://t.co/m8y6wNle5E pic.twitter.com/pJvtw9NuQg

Using the WASD keys to move and the spacebar to shoot, players can run around in a field and gun down wave after wave of feral hogs as their two NPC children play in the grass. Players lose and are forced to restart if the feral hogs reach the children. True to the real life argument Twitter user @WillieMcNabb was making when he first spawned the meme, users must use a semi-automatic rifle to kill the hogs in the video game — taping the space bar once for every bullet fired at the animals.