This Economist Cover About Latinos Is Raising Eyebrows

This Economist Cover About Latinos Is Raising Eyebrows

The Economist ran what some are calling an “ill-advised” cover last week that shows an American flag constructed with chili peppers with, “Firing up America … a special report on America’s Latinos.” 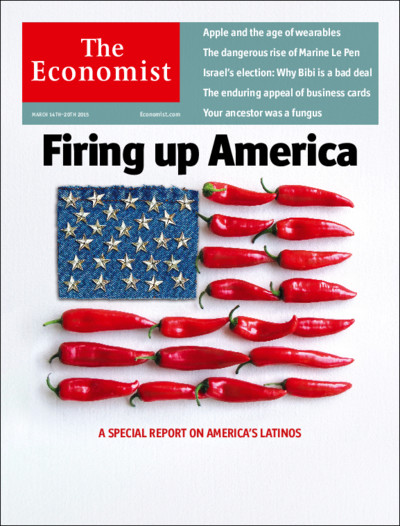 Even though the cover was first released last Thursday, it didn’t gain much steam online until today, when many journalists and activists scolded The Economist for it.

According to liberal blog Media Matters, the content of the cover story itself was “mostly positive,” but using chili peppers was “tone-deaf and destructive,” ignores the diversity of the Latino community, and perpetuates a false stereotype. Later in the Economist piece, Latinos are described as “chilies in the mix.”

The people at @TheEconomist somehow thought this was a good cover pic.twitter.com/lLpHHEcZ3P

@Carrasquillo @AdamSerwer I just love how they distilled Latinos' various flags into one reflecting our universal language! @TheEconomist

How many Latinos work at the Economist? pic.twitter.com/U5kL8mrVfk

Please stop depicting Latinos as spicy. We're not spicy. You're just pissing us off. http://t.co/OXjyX7E5FB pic.twitter.com/etx8Gajtb5

LIKE HOW DID THIS GET THROUGH EDITING. WE ARE NOT A "CHOPPED" INGREDIENT FFS. http://t.co/OXjyX7E5FB pic.twitter.com/GnTjv1AtNU

Is "The Economist" serious? This is their cover?? WOW. #Latinos #Latism pic.twitter.com/Vn2iyzszA8

Vox went as far as to call the cover “embarrassingly racist”:

But others couldn’t resist having a little fun with it:

[Featured image via screengrab / The Economist]