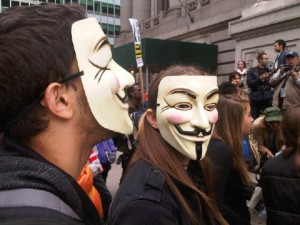 A TIME poll taken on October 9 and 10, with a base of 1,001 people, has turned up some interesting results about how Americans view the Tea Party, Occupy Wall Street, and dysfunction in Washington. 81% of respondents think the country is on the wrong track, but they’re reluctant to place the blame fully on President Obama for the problems; 50% of the respondents disapprove of the way he’s handling the job, but 59% believe that he cares about them, and half of the respondents say he has the toughness necessary to see this through. On an exceedingly grim note, only 4% of the 1,001 polled feel positive about the state of the country today.

The poll asked people to identify which faction of government best represents their views. 30% identified with Democrats, while 17% said Republicans and 12% went with the Tea Party. So if you’re looking for a left-right bias, it leans slightly to the left (30% left to 29% right), assuming the designations of Democrats to the left; Republicans and Tea Partiers to the right. A whopping 39% of the respondents identified with no party or the always-popular “other” designation.

Digging even deeper into the numbers, the Tea Party was more hated (24% “very unfavorable” to OWS’ 13% “very unfavorable”), while OWS was more readily embraced (25% “very favorable” against the Tea Party’s 8% “very favorable”). For Tea Party supporters looking for any kind of silver lining, the group of poll-takers didn’t have much faith in OWS being more than just protests and tent-pitching — 56% said they felt it would have little impact on American politics.

There were some other interesting nuggets in the poll; 71% of respondents, for instance, believe that Wall Street executives should be prosecuted if they were found responsible for the 2008 financial meltdown. But what sticks out is the large gap between OWS and the Tea Party. With virtually equal amounts of left and right-leaners answering the polls, and independents tending to go in the Ron Paul direction (let’s not forget — the man pretty much invented this Tea Party), it’s kind of shocking to see such a difference between the OWS movement and the Tea Party. Maybe it’s because the OWS movement isn’t wholly politicized yet and it’s tough to disagree with the “down with the rich!” sentiment. But as it matures into whatever it turns out to be, these numbers will likely change.