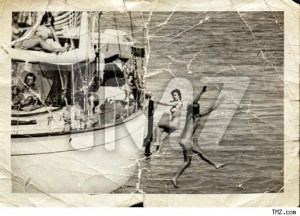 What would have happened if TMZ was around during the Kennedy Administration? They very likely could have changed history.

Today they published an image from the 1950s of then-Senator John F. Kennedy on a boat with naked women. And watch out sports stars, this could be your future. Update: The pic could be fake.

Calling it “The JFK Photo That Could Have Changed History,” the photo appears to be a lounging Kennedy on a boat with at least four nude women. The photo is believed to have been taken in the mid-50s (Kennedy married in 1953). The high-res image can be downloaded at TMZ.com.

TMZ reports they went through a rigorous verification process:

TMZ had multiple experts examine the photo — all say there is no evidence the picture was Photoshopped. The original print — which is creased — was scanned and examined for evidence of inconsistent lighting, photo composition and other forms of manipulation. The experts all concluded the photo appears authentic.

50 years later, this photo seems to provide some level of evidence to what everyone really assumes about JFK anyway. But back in the 1960s, if a young TMZ Gazette felt no qualms about trafficking in yellow journalism, this image could have done serious damage to Kennedy’s political future.

And while TMZ focuses mainly on celebrities, but certainly politicians as well, the Harvey Levin-run site is expanding to sports (as rumored last week).

“I don’t really see a difference between a sports star and a celebrity,” Levin tells the New York Times‘ Brian Stelter.

TMZ Sports is hiring – and the Time Warner-owned site is ready to expand its sports reach already seen on the main site. Tiger Woods was just the beginning.

So if you’re a teen pop star, L.A. Lakers shooting guard or former President dead for 40 years – TMZ is watching.

> Update: The Smoking Gun is reporting, with some pretty convincing evidence, that the photo is fake, and actually came from a 1967 Playboy photo shoot. TMZ is acknowledging the possibility. What’s that about TMZ going mainstream again?