‘To the Taco Truck!’: Mike Pence Gets Mocked and Blasted Over #ThatMexicanThing

‘To the Taco Truck!’: Mike Pence Gets Mocked and Blasted Over #ThatMexicanThing 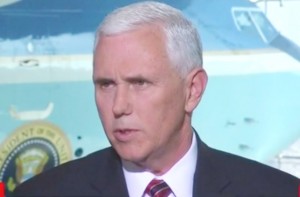 Latino Twitter and Trump critics turned out in full-force last night to slap Mike Pence over his vice-presidential debate remark about how Tim Kaine kept whipping out “that Mexican thing.”

Pence spent a lot of his time fending off Kaine’s attacks about Donald Trump, while also dodging Kaine’s challenge to defend his own running mate. While conversation has suggested that Kaine overplayed his hand and lost the night overall, it makes sense that he’d bring up the enormous friction between Trump and the Hispanic community.

As for Pence, many debate viewers found his remark a bit odd to say the least, so they reacted by doing that thing they do online.

"Honey, where'd you put #ThatMexicanThing ?"
"It's on the shelf, next to the #BindersFullOfWomen."

Of course, once you get past the mockery, there were plenty of people who took issue with Pence’s defense of Trump’s rhetoric, and they explained what “that Mexican thing” really is:

#ThatMexicanThing where immigrants harvest all our food, a job white Americans considers beneath them. #VPDebate

#thatmexicanthing where we work hard, play by the rules & continue to be discriminated. While .@realDonaldTrump cheats the system #VPDebate

#ThatMexicanThing when your parents told you at 6 you could go to college wherever you wanted, and you end up with two Ivy League degrees.

#ThatMexicanThing My Grandma cleaned houses and picked crops. Because of her I went to one of the most prestigious colleges in America.

#ThatMexicanThing is my dad who served his country in Vietnam, was a first generation college graduate, and paid his fair share of taxes.

Millions of Latino voters, showing up at the polls to reject blatant hate #ThatMexicanThing

ThatMexicanThing.org is also a thing now, and it’s being used to register people to vote.