Trump Compliments Keith Ellison for Predicting His Win, Ellison Responds With Promise to Stop Him

Trump Compliments Keith Ellison for Predicting His Win, Ellison Responds With Promise to Stop Him 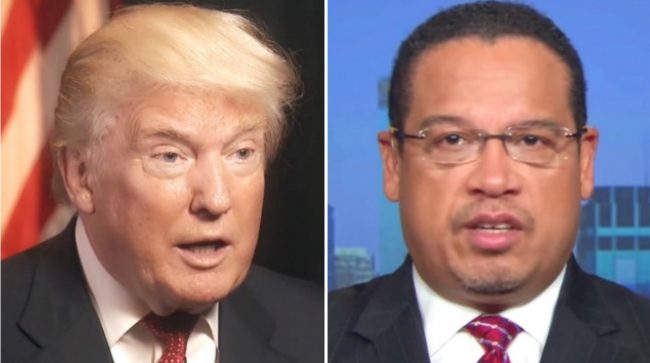 If Donald Trump thinks he can get Keith Ellison to warm up to him by praising his foresight, the president might want to think again.

On Wednesday morning, Trump got on Twitter and offered a complimentary message to the Minnesota representative who’s making an effort to become the new chairman of the Democratic National Committee:

One thing I will say about Rep. Keith Ellison, in his fight to lead the DNC, is that he was the one who predicted early that I would win!

It’s likely that the prediction Trump is referring to is an interview that Ellison gave on ABC’s This Week back in 2015. Ellison was on to discuss the early stages of the 2016 election, and during his appearance he became one of the first Democratic figures who warned that Trump had a very real chance of winning the Republican nomination, and possibly, the presidency.

Ellison has been critical of Trump since he took office last month, and when he noticed today’s tweet, he offered a vow to stop Trump from dividing the country:

.@realdonaldtrump, my latest call? America is coming together like never before; we’ll stop your drive to divide us. #libertyjustice4all https://t.co/jifSdJbnrG