Twitter Lights Up Over GOP Vote to Release Nunes Memo: ‘Assault on the Mueller Investigation’

Twitter Lights Up Over GOP Vote to Release Nunes Memo: ‘Assault on the Mueller Investigation’ 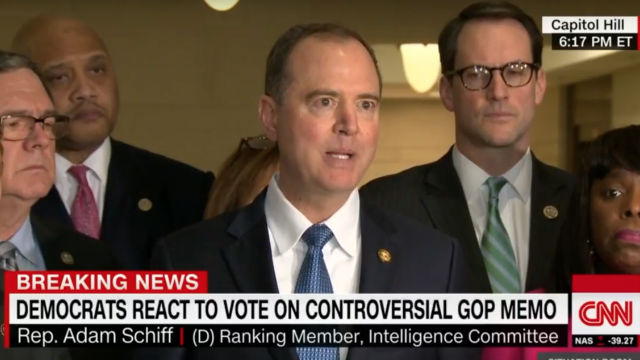 It's funny how the GOP gives ful credit to anything that comes out of the OIG's investigation of the FBI's handling of the HRC investigation, but yet finds the OIG too untrustworthy to review the Nunes Memo before it's released to the public. ?

When Putin invaded and "annexed) Crimea, at least there was some pushback. The GOP just handed the U.S. to Putin. Using the memo to shut down Mueller, and then Trump announced he will defy the Congress and will NOT impose sanctions on Russia that Congress voted for. #Treason

Schiff sounds like he’s panicking. One memo that has been available to all congress to read for a week will be made public but he wants to release his without showing anyone. Same old nonsense from him. I think I’ll win my bet that he leaks his. That seems to be his thing. https://t.co/TelyYEMyw2

He also wants to release a memo that he hasn’t let anyone else see? Seems odd the republicans let the whole house look for a week without leaks. Why wouldn’t Schiff do the same? https://t.co/K3MGN2sB77

The memo itself is far less important than the fact that GOP Congressmen are now at war with our own law enforcement and intelligence community, something in a lifetime of being a Republican I never expected to see. This will end badly.

The Democrat MEMO should be required to have the same scrutiny as the Republican FISAMemo or it should never be allowed to be released. Looked at by the DOJ and the FBI.

Putin is celebrating BIG time. Not only did the WH refuse, again, to implement Russia sanctions overwhelmingly put forward by Congress, House Republicans just voted to release a total bullshit memo to obstruct the Trump-Russia Investigation & risk work of our intel community.

In his press conference, Adam Schiff managed never to mention this while suggesting Majority trying to block the Dem memo’s release. Slippery. https://t.co/B2k7uQ3X44

And now Nunes is seeking to discredit our DOJ and FBI – Mueller will be next. We are heading for a crisis folks!https://t.co/6wU6j8vFVZ

Releasing the Nunes' memo but not the minority rebuttal or the supporting intel docs isn't just partisan games, it's junta BS.

They're here with the Secret Society of Querulous Philatelists to put a stamp of approval on the Nunes' Magic Make-Believe Memo.

Schiff exits the vote in tears – says a regrettable decision has been made. In other words, Americans will see the memo that will expose the Democrat deep-state as a Racketeering Influenced Corrupt Organization. #ReleaseTheMemo

Nunes leading us toward the Full Banana.

They couldn’t be more transparent about what this is: a direct assault on the Mueller investigation to protect the president. https://t.co/V6ph2B3zIv