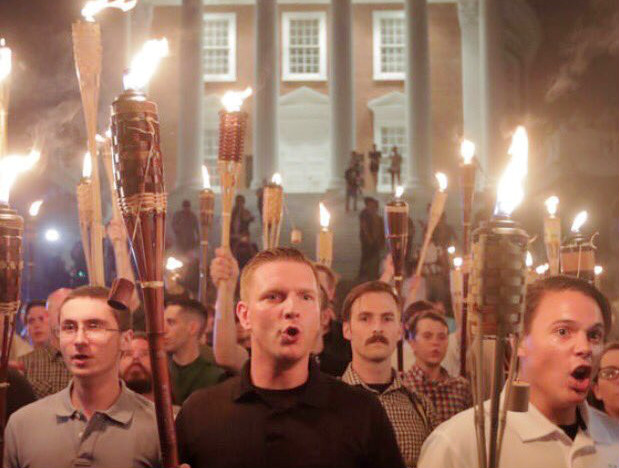 Last night, hundreds of white nationalists, alt-righters, and white supremacists gathered at the University of Virginia to for a torch-lit march ahead of today’s “Unite the Right” rally in Charlottesville, Virginia. The rally today is expected to attract thousands at Emancipation Park, where a statue of Robert E. Lee is scheduled to be removed by the city. The Southern Poverty Law Center is describing the rally as the “largest hate-gathering of its kind in decades in the United States.”

During the march last night, protesters were heard chanting “white lives matter” and “blood and soil,” among other things. And, by the end of the rally, the white nationalists had gotten into brawls with counter-protesters, leading to police to break the whole thing up.

And while there was quite a bit understandable outrage and anger expressed online about the message that was being delivered by the racist bros, many decided to take to Twitter to viciously ridicule the rally goers. One of the main targets for mockery was the marchers’ decision to use tiki torches:

These are legit scary assholes, but they'd be scarier if they didn't use citronella tiki torches they bought from Lowes. https://t.co/QL3p6ecCFA

Y'all, we can't get dates on Friday night (again) so we're fixin' to pick up some tiki torches at Walmart & have a klan rally. Who's in? pic.twitter.com/2AUambrslN

Judging by the cloud of citronella off those tiki torches, they've "had it up to here" with the tyranny of bug bites. #Charlottesville pic.twitter.com/olBtpmlBZ7

100 sexless men walk into a Wal-Mart: "We'll take all the polos and tiki torches that you've got." pic.twitter.com/l2ICWelrpx

It's true. Jews will not replace them. We don't carry tiki torches. Too tacky. https://t.co/SnMl64KQF2

[sees crowd of tiki torches]
Seems there was some sort of anti-mosquito rally last night. pic.twitter.com/J0TK9ACuww

We shouldn't ignore the sheer power of Nazis in khakis carrying discount tiki torches they bought at Walmart. #Charlottesville pic.twitter.com/ecoeBN94sP

I don't understand white men. They have the good jobs, the government, disposable income to waste on tiki torches. What's their problem?

It's the tiki torches that I find most intimidating. https://t.co/6fniRaTq6T

Our own Jon Levine got in on the action:

Jon Levine is calling for a complete and total shutdown of Pier One Imports until we can figure out what the hell is going on pic.twitter.com/JFQSkuI15L

And Teen Vogue’s Lauren Duca gave a perfect summary of the the imagery depicted:

They're nazis & fucking idiots. The tiki torches make it look like they're protesting Karen's decision to include cilantro in the guacamole. pic.twitter.com/UYSpk8PF15

And Sen. Orrin Hatch (R-UT) both mocked the marchers and condemned their message:

Their tiki torches may be fueled by citronella but their ideas are fueled by hate, & have no place in civil society. https://t.co/himqTMBQnH