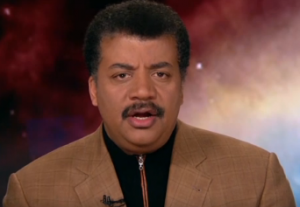 Celebrity astrophysicist Neil deGrasse Tyson continued his Twitter tradition of tweeting observations on the latest science fiction film with Star Wars: The Force Awakens. Unsurprisingly, his nitpicking was met with a great deal of irritated sarcasm from fellow Internet trolls.

Most of what Tyson had to say about the film was humorous in nature. For example, his first tweet poked fun at the dueling lightsaber colors of blue and red, and how these mirror the Democratic and Republican parties in American politics.

In @StarWars #TheForceAwakens, I’m reminded that Red & Blue teams cooperate with one another. Rare in American Politics.

Or his opinion that, almost 30 years on, stormtroopers still run “as though they’re carring a full load of poop in their diapers.” Whatever that means…

In @StarWars #TheForceAwakens, the Storm Troopers still run as though they’re carrying a full load of poop in their diapers.

But it wouldn’t be a Neil deGrasse Tyson Twitter rant if science wasn’t involved. And not just science, but science employed to point out how impossible certain things are — even though the subject as a fictional film combining science fiction and fantasy.

In @StarWars #TheForceAwakens, BB-8, a smooth rolling metal spherical ball, would have skidded uncontrollably on sand.

In @StarWars #TheForceAwakens, if you were to suck all of a star’s energy into your planet, your planet would vaporize.

In @StarWars #TheForceAwakens, the energy in a Star is enough to destroy ten-thousand planets, not just a few here & there.

Needless to say, Tyson’s latest screed met with a great deal of opposition.

I love how @neiltyson is trying to science #StarWars, a thing that's fundamentally fantasy.

NEIL TYSON: It's impossible for a star to fight a war because it's not a sentient being CASHIER: I need you to buy a ticket or leave, sir

.@neiltyson also how could there be ENTIRE PARAGRAPHS OF TEXT just floating through space? surely they'd crash into a planet or something

shut the fuck up https://t.co/S1YhjiUxe9

Even the official Star Wars Twitter account chimed in with its own “well actually” for one of Tyson’s complaints.

@Superdonaldo @neiltyson BB-8 is very much a real robot with puppeteers. There were a few that did different scenes: https://t.co/WRN5DEIUJ7