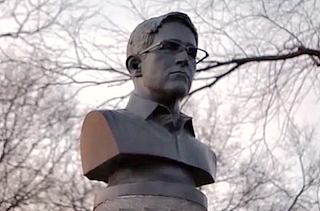 Animal New York got to film the installation of an Edward Snowden bust in Fort Greene Park, Brooklyn, and released the clip online Monday morning.

The bust was placed atop a stone column in front of the Prison Ship Martyrs Monument, which memorializes the 11,500 prisoners who died after Revolutionary troops retreated during the Battle of Long Island. “We feel it’s a continuation of a story that was started hundreds of years ago,” one of the participants explained. “These are people who died in part so that our country can have the freedoms that this country was founded on.”

The project was conceived by a pair of New york artists, and involved a West Coast sculptor; at least four people helped place the bust atop the column. Animal was allowed to document the process in exchange for granting anonymity to the artists/perpetrators; the voice of the participant heard in the video was altered to protect his or her identity.

RELATED: John Oliver Travels to Russia to Tell Edward Snowden It’s All About the ‘Dick Pics’

“We’d gone to great lengths to make sure that aesthetically the item that we’re placing is honoring the aesthetics that are already in place,” the participant continued. “Everything from the width of the shoulders of the statue being the same width as the eagle’s wings to the bronze patina finish, everything has been made so that it feels like a cohesive unit. But we’re also installing it so that it could be removed without doing permanent damage to the structure.”

“If it gets taken down right away, it will certainly be a disappointment,” s/he concluded. “But the fact that a risk was taken, the fact that image comes out of that event that can be passed around, can never be undone. You can rip the statue out, but you can’t erase the fact that it happened and that people are sharing it.”

“The artists admit that Snowden probably wouldn’t approve of the project, since he never wanted the leaks to be about him,” Animal noted. “But they hope he’d understand why they did it.” In Russia, irony gets you.