When is the Kaine/Pence Vice Presidential Debate? 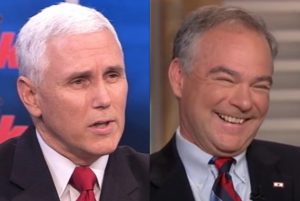 After months of speculation about who the major party candidates would choose to be a part of their presidential tickets, it’s nearly time for the Vice Presidential debates live from the campus of Longwood University in Virginia. Indiana Governor Mike Pence will represent the Trump candidacy battling Senator Tim Kaine of Virginia, Hillary Clinton‘s choice for VP.

All debates are from 9-10:30 PM Eastern and will be airing on all major networks (NBC, CBS, ABC, PBS, CNN, Fox News, Fox Business, CNBC, MSNBC, Univision, and C-SPAN) simultaneously. Mediaite will have livestreams available online to watch below.