White House Responds to Gates: Biden a ‘Leading Statesman of His Time’

White House Responds to Gates: Biden a ‘Leading Statesman of His Time’ 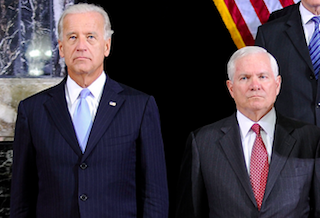 The White House has issued an official response to excerpts released earlier today from the forthcoming memoir by former Defense Secretary Robert Gates. In the book, Duty: Memoirs of a Secretary at War

, Gates suggests that President Barack Obama came to disavow his own strategy in Afghanistan. But his harshest remarks are saved for Vice President Joe Biden.

“I think he has been wrong on nearly every major foreign policy and national security issue over the past four decades,” Gates writes of the vice president. According to the White House statement, Obama “disagrees with Secretary Gates’ assessment.”

The president deeply appreciates Bob Gates’ service as secretary of defense, and his lifetime of service to our country. Deliberations over our policy on Afghanistan have been widely reported on over the years, and it is well known that the President has been committed to achieving the mission of disrupting, dismantling and defeating al Qaeda, while also ensuring that we have a clear plan for winding down the war, which will end this year. As has always been the case, the president welcomes differences of view among his national security team, which broaden his options and enhance our policies. The president wishes Secretary Gates well as he recovers from his recent injury, and discusses his book.

The president disagrees with Secretary Gates’ assessment – from his leadership on the Balkans in the Senate, to his efforts to end the war in Iraq, Joe Biden has been one of the leading statesmen of his time, and has helped advance America’s leadership in the world. President Obama relies on his good counsel every day.