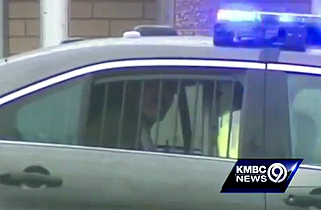 Frazier Glenn Miller was identified Sunday afternoon by the Southern Poverty Law Center as the gunman who killed three people in an attack on two Jewish sites in Overland Park, Kansas. According to SPLC’s file on Miller, who was arrested under the alias Glenn Frazier Cross, he has been involved in white supremacist movements since the later 1970s, mostly ads a “grand dragon” in the Ku Klux Klan.

Miller was arrested Sunday after shots were reported at both the Jewish Community Center of Greater Kansas City and the nearby Village Shalom, an assisted living center. A local news station captured Miller, then unidentified, appearing to yell Heil Hitler from the backseat of the cop car:

After being discharged from the army, Miller joined the National Socialist Party of America (read: Nazis) and then formed the Carolina Knights, a group explicitly based on the teaching and practices of Adolf Hitler and one bent on turning the Carolinas into an all-white state. After the Carolina Knights he formed the White Patriot Party, which the SPLC described as a paramilitary outfit that dressed in fatigues and trained with Marines.

He served three years after being smoked out of his home by the FBI, which found quite an arsenal in his possession, including hand grenades. Originally sentenced to five, the term was reduced after Miller rolled over on more than a dozen of his fellow white supremacists.

Miller has also run for office several times, served as a radio host, and written an autobiography.

He wrote in 2010 about visiting a classroom at Missouri State University:

The two extremely ugly kikes, one fat one skinny, did not deny one single charge I made against the jews. Their several questions were incredibly stupid, really. They did remain defiant with frowns the whole time, though. Noses stuck up in the air as if to dare me to do something about jewish attrocities.

[snip] The skinny kike and I got so heated at one point, I raised up and blurted out, “Hell yes, I hate you and all jews, and you all deserve my hate for what your people have done to mine. Later she asked if I thought all jews knew about the jew attrocities I spoke about. I said that all intelligent jews do, and that since Germans are collectively blamed , jews should be also. She denied knowing anything, and I called her a “typical jew liar”.

The professor, David Embree, told BuzzFeed’s Rosie Gray that he’d invited Miller to demonstrate to his students the extremities of white supremacist thought.

Some of Miller’s choice quotes:

“White men have become the biggest cowards ever to walk the earth. The world has never witnessed such yellow cowards. We’ve sat back and allowed the Jews to take over our government, our banks, and our media. We’ve allowed tens of millions of mud people to invade our country, steal our jobs and our women, and destroy our children’s futures. America is no longer ours. America belongs to the Jews who rule it and to the mud people who multiply in it.”
– U.S. Senate radio ad, 2010

“Our forefathers were absolutely right to be racists and to discriminate in favor of themselves. That racism and discrimination insured racial security, prosperity, and racial survival and procreation. ZOG and the Jews-media tricked us and shamed us out of our racism shame that has weakened us and divided us as a people, therefore cowards, unwilling to resist Jewish enslavement and genocide.”
– “Cowardice is the White Man’s Survival Strategy!” Miller’s website