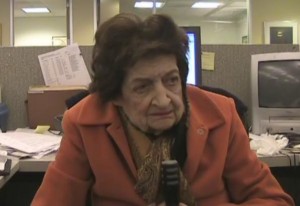 Legendary White House reporter Helen Thomas came under some fire last week for a question she asked of counter-terrorism czar John Brennan at Thursday’s briefing. She asked Brennan and DHS Secretary Janet Napolitano about the motivation behind attacks like the Christmas attack on flight 253, and then pressed the issue with Brennan.

I asked Helen to explain her line of questioning, and whether she was satisfied with Brennan’s answer.

Transcript:
TC: You asked John Brennan, you said why are they trying to attack us. A lot of our readers had questions that were critical. What were you trying to get at with that question?

HT: I was trying to find out why. Why? Look, we’ve been in this war 8-9 years, against this so-called “terrorism,” and I do say so-called because in the newspapers if you read, you read about the militants. You don’t read about us bombing everybody, and never really explaining why and going into 3-4 different countries in the Middle East, Africa and so-forth. Who are we? Why are we doing this? Why isn’t every reporter asking that? Don’t you think you ought to know why you’re asked to go kill and die?

TC: So, what sort of response were you expecting from Brennan? Did you get what you expected? Were you satisfied with the answer?

HT: Hell no, because the real reason is foreign policy. How would we like foreign troops coming into our country and killing the people? That’s the answer. They say religion and everything else. Religion could be a good cover story in maybe some element, but the real reason is us being in places where we don’t belong – Afghanistan, Iraq – with no reason, no Iraqis were in 9/11.

Helen has made waves like this before. The day of my first regular briefing, I asked Helen to respond to criticism from the likes of Bill O’Reilly for having used the term “so-called terrorists” in questioning the President at his first prime-time news conference. Helen’s response ended up on the Factor, uncredited and misleadingly edited, but here’s all of what she had to say that day: