Why Do Single Women Have Such Low Voter Turnout Rates?
Opinion

Why Do Single Women Have Such Low Voter Turnout Rates? 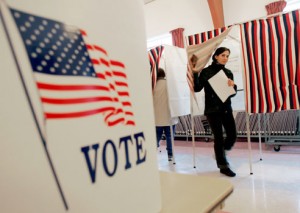 According to a report by the Voter Participation Center, a nonpartisan nonprofit focused on getting young Americans registered to vote and Lake Research Partners put out last week, some 40 million Americans who voted in the 2016 presidential election aren’t going to vote in 2018 midterm elections. And while single women, people of color, and millennials are popularly known as the Rising American Electorate, according to the study, two thirds of the aforementioned 40 million Americans will be members of the RAE.

Just by nature of the fact that there tends to be less energy and publicity around midterms, just about every voter demographic experiences a pretty steep decline in voter turnout from presidential elections to midterms.

But while turnout among older white voters is expected to decrease 22 percent from 2016, turnout among millennials, people of color, and unmarried women could fall 35 percent. There’s some logical explanation for this.

Page Gardner, founder and president of the Voter Participation Center, told Refinery 29 this is partially because millennials aren’t as geographically settled, rendering it more difficult to register and find polling places. Young, single women are also more likely to be working hourly or multiple jobs which also makes it more difficult to take time off to vote.

And this could all be true, but it’s also entirely possible there’s something going else here too. Sexism can be easy to internalize, and while just about every American is guilty of experiencing “my one vote probably won’t make a difference” syndrome, it’s easy to see how women are more likely to believe this, growing up in a culture that’s told them their voices and opinions weigh less than men’s. When you’re constantly being talked over in the workplace or casual conversations, when the vast majority of people explaining birth control and abortion on television are men, it becomes easy to question whether or not any of the things you care about matter to other people.

But another factor according to experts at Emily’s List is who’s on the ballots. Women are more motivated to vote when they have quality options who fight about the issues they care about, the organization which supports pro-choice Democratic women running for office, also told Refinery 29. This, in itself, is another problem. In an age of Democrats increasingly shying away from “identity politics,” I have my doubts about seeing a field of candidates running on support for Planned Parenthood.

Nonetheless, there are solutions to all of this. Local initiatives to make polls and voting hours more accessible could help young women who want to vote but aren’t able to; organizations like Emily’s List mentor and help fill ballots with female candidates who represent women’s interests. 2018 is just around the corner, and if we want young women to get out to vote, there’s a lot of work to be done.