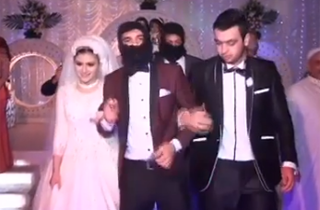 Ahmed Shehata, a 25-year-old Egyptian man about to get married, didn’t want his wedding to be “formulaic,” so he and his friends planned a surprise for their guests: his groomsmen, pretending to be knife-wielding members of ISIS, would kidnap his new wife.

The video of the fake kidnapping — complete with a remix of the ISIS anthem and a dance party inside a makeshift cage — quickly went viral, with many Egyptians condemning the stunt as being in poor taste in light of ISIS’s recent mass execution of 21 Egyptian Christians.

It was a surprise to the bride, Shaimaa Deif, as well as her father, who momentarily thought that ISIS was actually kidnapping his daughter. But she’s taking it in stride, as she explained to the Guardian:

“I knew there would be a surprise,” she later told the Guardian, after a video of the bizarre incident went viral on Egyptian social media. “But I never imagined that the surprise would be like that.”

Deif’s momentary panic soon subsided into amusement after the music merged into a dance-track, one of the masked men revealed himself to be her brother, and it turned out the groom had been in on the stunt all along.

Deif admitted that she had not expected the dark cloth she gave her fiance in the run-up to the wedding to be used to make fake Isis masks: “I thought it was for something romantic,” she said.

But she gamely argued that the prank sent a strong message to Isis. “The cage you’re scaring us with, we are dancing inside it,” said Deif, addressing the transnational jihadi movement.