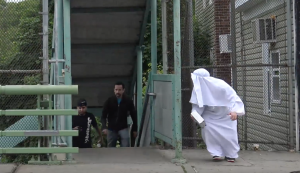 While America might not want to completely give in to Islamophobia, the current terror climate probably makes any subconscious bias extremely difficult for people to ignore right now.

It wasn’t even two days after ISIS-inspired horribleness in Orlando when a YouTube celebrity prankster published a “social experiment” he filmed on the different reactions between a potential threat from an Islamic terrorist and a Christian terrorist.

Joseph Saladino (aka JoeySalads) specifically set up the experiment so that his “Muslim” terrorist would wear Arabic-looking clothes and scream “Allahu Akbar” while throwing a metal container towards unsuspecting civilians. As you might expect, people were much more terrified of “Muslim terrorist” Stevie Croutons than they were when Saladino shouted “praise Jesus” and threw the same container.

Understandably enough, some people were unamused:

While Saladino responded to critics and said the video was filmed before the shooting, he was soon taken to task by Yousef Saleh Erakat, a Muslim and fellow YouTube star.

“Why is the Christian in your experiment dressed in normal clothing?” Erakat said in a reaction video. He went on to say if “you wanted to push a stereotype, have the other character dress as KKK and now tell me it’s okay.”

Paladino put a note in the video that he would donate any money it made to the Orlando victims, though he posted on his vlog channel that someone has since punched him in the face in retaliation for the experiment.