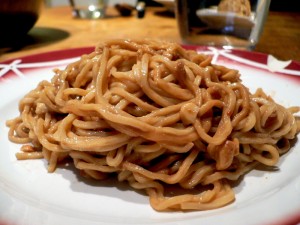 [Sifton] has run two departments exceptionally well, and nobody would be surprised to see him running something in the future. For now, though, his running will be on a treadmill at the gym. After some overdue vacation and a few weeks of warmup eating, Sam will take over the critic’s chair in October.

Sifton — ultimately the “obvious and eccentric choice” for Keller —  won out over two or three other Times writers and Brett Anderson of the Times-Picayune, the only external candidate according to The New York Observer.

Bruni, who Keller said was “not the obvious choice” when he was first pulled from the Rome Bureau to be restaurant critic, will continue to write for the Sunday magazine, when he’s not busy promoting his latest book, Born Round: The Secret History of a Full-Time Eater (2009).

In the weeks since the announcement that Frank Bruni would be hanging up his napkin, we’ve received numerous applications for the job of NYT restaurant critic. We narrowed the list, and then narrowed it some more. We had some really impressive candidates, writers who know their food and have interesting things to say about the way we eat.

Then we threw out the list and drafted Sam Sifton.

The choice is both obvious and eccentric.

It is obvious because, as a brilliant editor of the Dining section, as an occasional essayist on food for our magazine, and as a writer of discernment and wit and erudition, he is the best candidate any of us can think of. This is a marquee job for The Times, and our next critic will have the unenviable job of following Frank Bruni. It is an obvious choice, too, because the prospect of reading Sam on a regular basis brings big smiles to our faces. Joe Lelyveld used to ask of any prospective appointment or promotion, “Where’s the lift?” On this one, the question pretty much answers itself.

It is eccentric because we are stealing one of our finest editors from one of our most important departments. This is certain to be a cause of anguish and anxiety in Culture, where Sam has run things with great skill, imagination, energy and good humor. Everyone understands that Sam the Culture Editor will be as hard an act to follow as Frank the Resaurant Critic. We’ve set ourselves the task of finding a new Culture Editor who will give us a lift, too. And we expect the anguish and anxiety to be short-lived.

For the record, it is our expectation that this will not be the end of Sam’s career as an editor/manager/entrepreneur/mentor. He has run two departments exceptionally well, and nobody would be surprised to see him running something in the future. For now, though, his running will be on a treadmill at the gym.

After some overdue vacation and a few weeks of warmup eating, Sam will take over the critic’s chair in October.