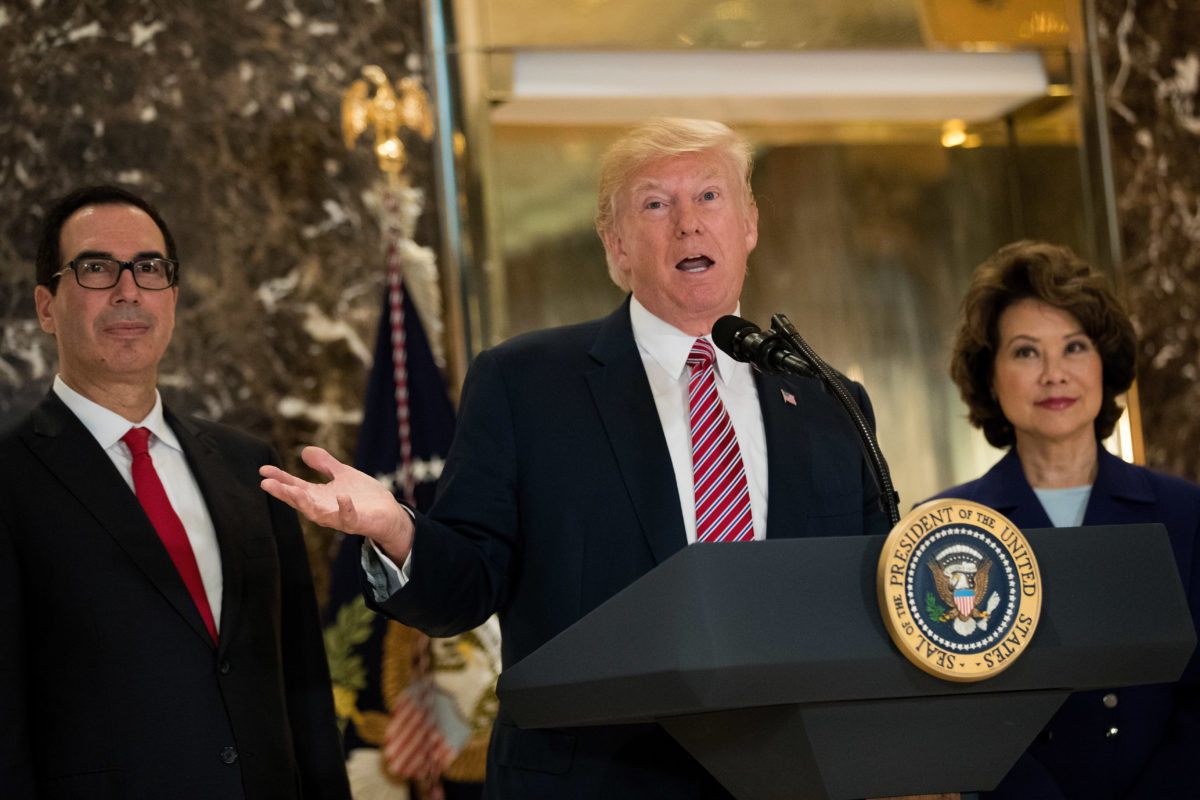 As news coverage of the El Paso mass shooting zeros in on the suspect’s white nationalist motivations, President Donald Trump’s own rhetoric on race is being criticized yet again. Notably, his description of a migrant “invasion” threatening the southern border and his defense of white nationalists after the 2017 Unite the Right rally in Charlottesville.

The media rehashing these controversies has prompted a fresh defense from the president’s supporters. This defense, crafted months after Trump’s “both sides” remark, holds that Trump never referred to the white nationalist rally-goers as “very fine people” during a post-Charlottesville press conference at Trump Tower, and was instead only referencing good-hearted attendees.

This theory was most recently popularized by CNN political commentator Steve Cortes, who proposed the defense in a video for conservative channel PragerU, which called this criticism of Trump a “lie” and accused the media of “malfeasance.” Cortes first made the argument in March while on CNN; he later published a more elaborate explanation in a Real Clear Politics op-ed.

This time around, Cortes’ defense is getting traction. The PragerU video was shared approvingly by Fox News senior political analyst Brit Hume and promoted on Fox News airwaves this week.

“One phrase eclipsed the thousands of words exchanged — the media reported that Trump described neo-Nazis as ‘very fine people.’ Only, he didn’t, in fact, he didn’t even hint at it,” Cortes claims in the video.

He goes on to insist Trump was “referring to another group of Charlottesville demonstrators who came out that weekend, protesters who wanted the Robert E. Lee statue removed and protesters who wanted to keep the statue and restore the park’s original name. This is what Trump said about those protesters, ‘You had very fine people in both sides.'”

So the “Charlottesville Hoax” theory alleges: (1) Trump condemned neo-Nazis, and (2) there were, in fact, fine people on the side protesting the removal of confederate statues.

To prove point (2), Cortes cites a 2017 New York Times report on Charlottesville, which included an interview with a woman named Michelle Piercy.

She claimed to the Times that she only attended the rally to protest against the “removal of a statue of the Confederate general” and “had no interests in standing with white nationalists,” adding that she drove to the rally with a non-extreme “conservative group.” There is your “fine” person, Cortes claims.

But Piercy failed to disclose to the Times that she actually attended the rally as a member of the American Warrior Revolution — a fringe right-wing militia that arrived in Charlottesville armed. Piercy also failed to disclose her claim that she was there not as a protester, but as a “neutral peacekeeper.”

The AWR was one of several anti-government, paramilitary groups present at Unite the Right, many of which patrolled the protest with AR-15s while also donning variations of the Confederate flag, Gadsden flag, and American flag in patches on their military gear. Citing “free speech” concerns, these militia groups often show up at fascist rallies to defend white supremacist groups against anti-racist protesters seeking to disrupt.

In another interview, Piercy had a different story than what she told the Times. While talking to Media Equalizer, she disclosed her ties to AWR and claimed to have acted as only “a neutral peacekeeper” in Charlottesville.

But at some point shortly after the president’s “very fine people” comments, Piercy told Times national reporter Jeremy Peters she was one of the “good people” that Trump referenced, who was at the event simply to protest the statue removal.

Peters “ran with this quote AFTER Trump’s ‘very fine people’ remarks. So Piercy was basically repeating Trump’s lie back to Peters, and Peters reported it as independent corroboration,” wrote journalist Jonathan Katz in a recent tweet criticizing the Times interview.

Mediaite contacted the Times regarding their failure to note Piercy’s membership in the AWR — and the changes in her story — but the Gray Lady declined to comment.

Cortes’ claim that there were indeed “fine people” at the Charlottesville rally relies solely on Piercy’s quotes in the Times. Piercy did not respond to Mediaite’s request for comment.

Regardless of the flimsiness of pointing to Piercy alone as proof of the theory, the argument that there was some third group of “fine” protestors at Charlottesville falls apart under the lightest scrutiny.

Here’s why: The event in support of the Robert E. Lee statue on August 12 was specifically billed as a white extremist unity rally.

Fliers for Unite the Right included Nazi symbols, Confederate flags, and a list of notable alt-right and neo-Nazi speakers. An entire free speech legal battle had unfolded in the months leading up to the rally due to its explicitly racist nature.

Granted, Trump’s comments were sloppy, and his equivocations make his intentions hard to pin down.

Nonetheless, Cortes ascribes remarkable specificity to his remarks in his piece for RCP: “Trump’s ‘fine people on both sides’ observation clearly related to those on both sides of the Confederate monument debate, and specifically excluded the violent supremacists.”

If we are to take Trump’s comments literally, however, a full transcript makes it clear that he was defending an unspecified number of white supremacist protesters, as he made sure to highlight “people in that group that were there to protest the taking down of” Confederate memorials.

Later in the press conference, the president explained that he was specifically defending some of the protesters who marched “the night before” against the “taking down of the statue of Robert E. Lee.”

Here is Trump’s reiteration of his comments on that night: “I looked the night before, if you look, they were people protesting very quietly the taking down of the statue of Robert E. Lee. I’m sure in that group there were some bad ones.”

Those “night before” protesters? They were the white supremacists who attended the Unite the Right rally the following day and their protest was far from quiet. Their nighttime activities involved marching with tiki torches through the University of Virginia’s campus and shouting neo-Nazi chants, including “Jews will not replace us” and “Blood and soil.”

“It is called the Charlottesville lie. The president never said there were fine Nazis — never said that. It is one of the greatest lies of my lifetime,” he said. “It is even evil, in my opinion, to spread this idea.”

This clear attempt at obfuscating the president’s comments fails to note that Trump provided two prior statements about Charlottesville before the infamous Trump Tower “very fine people” remarks, in which he made similarly ambiguous comments. In them, he declined to condemn racists and blamed “violence on many sides,” casting equal culpability on anti-racist protesters and the white supremacists. The latter group, of course, was responsible for the protest ending in bloodshed, when a neo-Nazi killed counter-protester Heather Heyer.