President Obama Comments On Trayvon Martin Case: ‘If I Had A Son, He’d Look Like Trayvon’
Video

President Obama Comments On Trayvon Martin Case: ‘If I Had A Son, He’d Look Like Trayvon’ 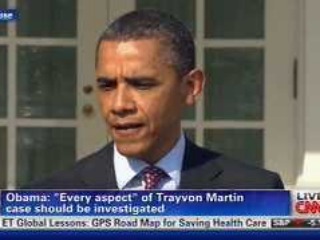 After introducing Jim Yong Kim, his pick to head the World Bank, at the White House Friday morning, President Barack Obama was asked to share his thoughts on the Trayvon Martin case, particularly on the role Florida’s “Stand Your Ground” law may be playing.

Obama — who had not previously offered a public statement regarding the case — refrained from commenting on legal issues, saying only that, as head of the executive branch, “I’ve got to be careful about my statements to make sure that we’re not impairing any investigation that’s taking place right now.” He did, however, share that he empathized with Martin’s parents and that the young man’s death made him think about his own daughters

“But, obviously, this is a tragedy,” he added, noting that we all have to “do some soul searching to find out why something like this happened.”

“I think every parent in America,” he said, “should be able to understand why it is absolutely imperative to investigate every aspect of this and that everybody pulls together — federal, state, and local — to figure out exactly how this tragedy happened.” He noted that he was glad that the Justice Department had stepped in to investigate the specifics of the case.

“But my main message,” he added, “is to the parents of Trayvon Martin. You know, if I had a son, he’d look like Trayvon. And, you know, I think they are right to expect that all of us as Americans are going to take this with the seriousness it deserves and that we’re going to get to the bottom of exactly what happened.”

Have a look at the President’s statements, via CNN: