#BlackLivesMatter: All Lives Matter Is A 'Violent Statement'
VIDEO

#BlackLivesMatter Activist to CNN: ‘All Lives Matter’ Is a ‘Violent Statement’ 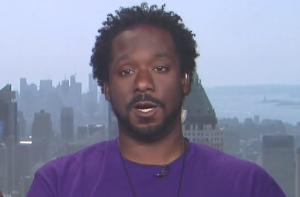 A #BlackLivesMatter activist appearing on CNN told host Wolf Blitzer that saying “all lives matter” is actually a “violent statement.”

Activist Julius Jones was invited on to discuss the protest movement’s contentious meeting with Hillary Clinton. “Black lives are actively under attack, and we are in a terrible war with our own country. African-Americans are Americans and we’re not treated like that, we’re not treated as if black lives matter.”