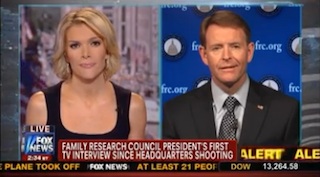 Yesterday, a clearly deranged and dangerous man named Floyd Corkins II, walked into the Washington D.C. offices of Christian lobbying group Family Research Council carrying multiple weapons. Apparently upset over the group’s extreme conservative beliefs, Corkins appears to have been planning to do major damage. And he probably would have, had it not been for the heroic actions of an unarmed building manager, Leo Johnson, who disarmed Corkin physically despite receiving a gunshot himself.

Today, FRC President Tony Perkins went on Fox News to talk about what really matters in this case; How it’s all totally the Southern Poverty Law Center’s fault because they called the FRC a mean name a couple years ago.

Back in 2010, the Southern Poverty Law Center officially designated the FRC a “hate group” because they, y’know, said hateful things like claiming there should be criminal sanctions outlawing homosexual behavior and repeatedly linking gay people to pedophiles. This designation has stuck in the FRC’s craw over the years (how can you be a hate group when you’re all about Christian love and family values?), so the group has apparently decided that this shooting of one of their employees is the perfect excuse to get rid of it.

Speaking to Megyn Kelly, Perkins assured viewers that Corkin was the sole shooter, but that the SPLC had given him “a license” to do what he did through their “reckless” language. Kelly pointed out that the designation was two whole years old and that no incident at all like this had ever occurred, but Perkins was undaunted in his claims.

Hey, guys, do you remember that whole Gabbie Giffords shooting last year? Remember how liberal commentators mistakenly rushed to connect the shooting to Sarah Palin’s “crosshair” map? Apparently, conservative groups haven’t learned anything from the other side’s failure of judgement.

I don’t want to try to speak of Mr. Perkins motivations (after all, this is a man who’s undergoing a horribly trying time with someone he describes as a “personal friend” currently recovering in a hospital), but this simply looks like a group using bloodshed as a way to win an old grudge.

Corkin’s motivations definitely appear to be political in nature, however, Perkins has no real reasons to believe the Southern Poverty Law Center had anything to do with the shooter except that he just doesn’t like them. Interviews like this (or people blaming Palin for Tucson, or video games for Aurora) just add more ugliness to a tragic event.

But, sure, knock yourself out Perkins. Blame a group you don’t like. But, remember everyone, never ever question gun control laws.

That just politicizes a tragedy.