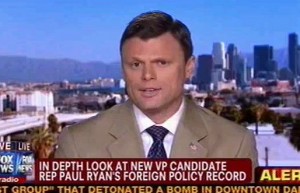 Not everyone with conservative ties cheered when Mitt Romney selected Wisconsin Rep. Paul Ryan as his presidential ticket running mate. Former Bush administration State Department official Christian Whiton appeared on Fox Saturday to address his concerns with the selection, asserting that Ryan is inexperienced with foreign policy and “too young” to become President.

“One reason this is a unfortunate pick opinion is that Paul Ryan has a very thin record on foreign affairs, which is a key criteria of course if you’re going to be supporting the man who will be commander-in-chief,” the D.C. International Advisory principal said. “Paul Ryan has said relatively little about foreign affairs and when he has it generally is brought back to his portfolio as head of the finance committee, so he’ll talk about how it’s important for America to thrive economically, to not appear to be in decline…But unfortunately what we don’t have from either the top or bottom of this ticket is a clear message on how these people will see the world and react to world events when they get into the White House if they do.”

Whiton went on to say Ryan doesn’t really compare to former VP Dick Cheney, stating, “If you take Dick Cheney’s criteria for what makes a good vice president, which is someone who can help the president govern, then Paul Ryan unfortunately is not likely to help much with the commander-in-chief role or managing the sprawling national security bureaucracy.”

When the Fox host mentioned that Whiton had worked on former presidential candidate Newt Gingrich’s campaign and was perhaps demonstrating “sour grapes” over losing, Whiton chuckled and responded, “Well I would say first of all Speaker Gingrich is static about this…But I think this is a poor choice on politics and substance. Politically I don’t know why you’d want the number two on the ticket to outshine the top of the ticket on the key issues of the day — the deficit, the economy, jobs…Paul Ryan is too young for presidency…If he were to assume presidency, he’d be the youngest, he’d have no executive experience.”