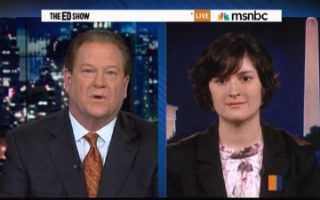 On Thursday, MSNBC’s Ed Schultz conducted an exclusive interview with Georgetown University law student Sandra Fluke, the woman whom Rush Limbaugh mocked on his radio show earlier that day. Limbaugh had called Fluke a “slut” and suggested that she — and her female classmates — post videos of themselves having sex while on birth control to make it worth people’s money:

So Miss Fluke, and the rest of you Feminazis, here’s the deal. If we are going to pay for your contraceptives, and thus pay for you to have sex. We want something for it. We want you to post the videos online so we can all watch.

Fluke, you may recall, was barred from testifying at the faith-based birth control hearing on Capitol Hill because she had been deemed “unqualified” by Rep. Darrell Issa. She later went on to testify at a Democratic hearing on the same matter.

Schultz asked Fluke for her reaction to Limbaugh’s comments:

I guess my reaction is the reaction a lot of women have when they’ve been called these names. Initially you’re stunned but then, very quickly, you’re outraged because this is, historically, the kind of language that is used to silence women, especially women who stand up and say that these are their reproductive health care needs and this is what they need. And what’s been amazing to me today is the outpouring of support. Everyone from members of Congress to Georgetown faculty to so many women who’ve contacted me, and I think it’s clear from what they’ve said that they’re not going to be silenced by this.

“He defamed you in the biggest way,” said Schultz before asking Fluke if she felt she had now been cast in a leadership role. Fluke responded that she plans on continuing to share women’s stories on the issue of contraception.

“This is really inappropriate,” Fluke later of Limbaugh’s comment. “This is outside the bounds of civil discourse.”