Get It Straight: John McCain Did Say Susan Rice Was ‘Not Very Bright’
video

Get It Straight: John McCain Did Say Susan Rice Was ‘Not Very Bright’ 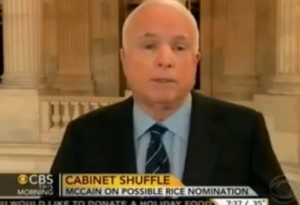 There appears to be some confusion as to whether or not Arizona Sen. John McCain referred to U.S. Ambassador to the United Nations Susan Rice as “not very bright,” with McCain’s defenders attempting to recast his comments in less damaging terms. For example, Democratic strategist and Fox News contributor Kirsten Powers says that Sen. McCain “said calling the attack spontaneous demonstration was ‘not very bright,'” and that “He didn’t say she wasn’t that bright.”

Sen. McCain may well wish he had said that, and Kirsten Powers may honestly believe that’s what he said, but that is demonstrably not what he said.

This is not to pick on Kirsten Powers, as she’s just the latest to offer this defense of Sen. McCain, and did so with Twitter-friendly efficiency. Like Kirsten Powers, I would prefer to believe that Sen. McCain did not speak with such contempt and condescension for Amb. Rice, and if Sen. McCain offered an apology and an explanation that he meant to say something else, I would take him at his word, but neither of those things are currently true. Here’s what Sen. McCain actually said:

“If this select committee clears her of any wrongdoing, besides not being very bright, because it was obvious that this was not a quote ‘flash mob,’ there was no demonstration, Charlie…”

He accused Amb. Rice of “not being very bright,” and while he was clearly using Rice’s Sunday show remarks to support that statement, the word “being” has a meaning; it means that the subject of his sentence (Amb. Rice) “is” not very bright, that non-brightness is her state of being.  If Sen. McCain had said “Ambassador Rice is so fat, when she sits around the house, she really sits around the house,” he wouldn’t be accusing her of only being fat when she sits around the house, he would be accusing her of being fat everywhere, and using her ability to literally encompass an entire house as support for his accusation of fatness.

Now, if Sen. McCain’s defenders want to argue that he meant to say something else, or that he should have said something else, that’s one thing, but he said what he said, and to say otherwise is not accurate.

and re: McCain saying she was “not very bright”…It’s rude and not true….but not racist. @tommyxtopher @Toure