Hannity Gets In Shoutfest With Guest Over Who The Real ‘Anarchists’ Are: Occupy Or The Tea Party?
VIDEO

Hannity Gets In Shoutfest With Guest Over Who The Real ‘Anarchists’ Are: Occupy Or The Tea Party? 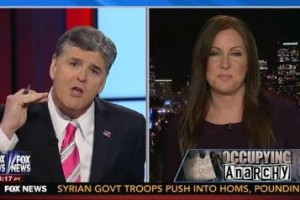 Sean Hannity found something ironic about Senate Majority Leader Harry Reid defending the characterization of Tea Party members as “anarchists” just one day after the left-leaning Occupy protesters took to the streets for May Day. Hannity invited The Five co-host Kimberly Guilfoyle and liberal contributor Leslie Marshall to weigh in on which group is doing more to obstruct progress in Washington: the Tea Party or the Occupy movement?

“Harry Reid should have turned his TV set on yesterday, because Tea Party members were not the ones rioting in streets,” Hannity began. “It was the anarchists inside the Occupy Wall Street movement.” After watching “violence once again by the left in this country” he wanted to hear one example of Tea Party members resorting to violent protest.

Marshall said she couldn’t offer up any examples of Tea Party members acting like Occupy Wall Streeters, but also said it was unfair to equate a small group of May Day protesters in Seattle with the larger left-wing movement.

Asked by Hannity what she thought about the fact that President Obama and House Minority Leader Nancy Pelosi “put their seal of approval” on the Occupy movement, Guilfoyle called the protesters “not just anarchists” but “out-right criminals.” She said “there is no comparison” between Occupy and the Tea Party.

Hannity went after the Democrats for becoming “a party of lying demagogues” who “lie about what it means to be Tea Party members, conservatives. They lied about Mitt Romney. They slander, they smear, they besmirch, there’s character assassination, and it’s almost daily.”

Guilfoyle strongly agreed with Hannity’s characterization, saying “this is about criminal activity condoned and sanctioned by the administration, by the liberal left, where they seem to glorify these individuals and reward them with public praise, and yet at the same time casting dispersions on the Tea Party, law-abiding people, that are fighting for smaller government and more financial responsibility. Those are good goals.” She added, “I’m appalled that they would condone this kind of criminal activity. Just goes to show you how wrong and false and anti-American their core ideology is.”

Before Hannity ended the segment, Marshall attempted to clarify another major difference between the Tea Party and Occupy Wall Street. The Occupy movement, she asserted, “has no power with legislation” while the Tea Party uses their “billionaire financial backers” to “write a check to a politician to buy their vote to block something that all Americans want.”