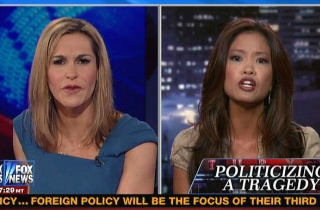 Sean Hannity introduced the segment with NYC Mayor Michael Bloomberg’s post-Aurora suggestion that police officers should go on strike until the government introduces stronger gun restrictions, adding that “within hours [of the shootings], the tea party is blamed; Sean Hannity is mentioned by name… Within hours, there is exploitation for political purposes.”

“Why this instant knee-jerk reaction by your side after almost every tragedy?” Hannity asked liberal panelist Holder.

“You don’t think it’s a knee-jerk reaction to say that all comments by liberals are insane?” Holder responded. “Michelle Malkin’s new blog says ‘insane comments by the left.'”

“I diagnosed it as ‘Blame Righty Syndrome’ in the wake of the mass murder hysteria after the awful atrocity in Arizona,” Malkin responded. “I wish Tamara would confront reality one of these days,” prompting an interruption from Holder. “Let me put the pause button on you and let me put a pause button this entire madness,” Malkin continued. “Michael Bloomberg, an elected government official, essentially endorse endorsed anarchy. He called on police officers who are paid and who are employed by the government to protect and to serve, to go on strike.”

When Holder attempted to interrupt Malkin again, the conservative columnist shushed her.

After a brief break in the tension, Malkin said that “the problem with people like Michael Bloomberg and with people like Tamara Holder is they don’t think about what they are saying. I take the time to listen.”

From there on out, the segment fit the mold of the shout-fest one would expect from a segment featuring Malkin and an opposing liberal commentator.