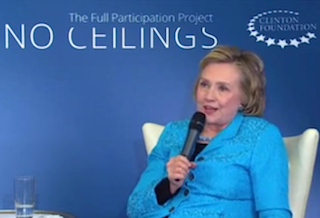 At the same Clinton Foundation-sponsored event Thursday where Chelsea Clinton announced her first pregnancy to the world, former Secretary of State Hillary Clinton took a question from a young, 19-year-old woman who chose to publicly reveal her status as an undocumented immigrant. “That was incredibly brave,” Clinton told the woman after she shared her story.

The woman, who introduced herself as Nova, got emotional as she told Clinton and the other people in attendance that she was an undocumented immigrant. Struggling through tears, she continued, “I want to say that it’s been extremely difficult for me to empower myself in America because I came here illegally when I was five” from Split, Croatia. She said her status has made it difficult to get a job and get a loan for college among other things American citizens take for granted.

She asked Clinton “what in your sense is essential for immigration reform” to help girls like her overcome this very different type of “glass ceiling.”

“Oh Nova,” Clinton responded as the audience applauded. “That was incredibly brave. And I thank you for doing that because it’s important to put ourselves in other people’s shoes. That’s one of the big hopes I have, is that we can get back to being a country where people can understand what others are going through and have empathy for it and really try to help each other.”

She went on to tell Nova about the program for young people who were brought to the United States as children to get citizenship and even offered her own personal support to her to figure out how to navigate it.

“I’m a huge supporter of immigration reform and a path to citizenship and will continue to advocate for that,” Clinton said. “And the more stories, so that people can put a real face on what it means to have been brought here when you were five years old, to have spent your entire life here, to have made your best efforts here, and that’s what immigration [reform] should really be about.”

Watch video below, via FWD.us: