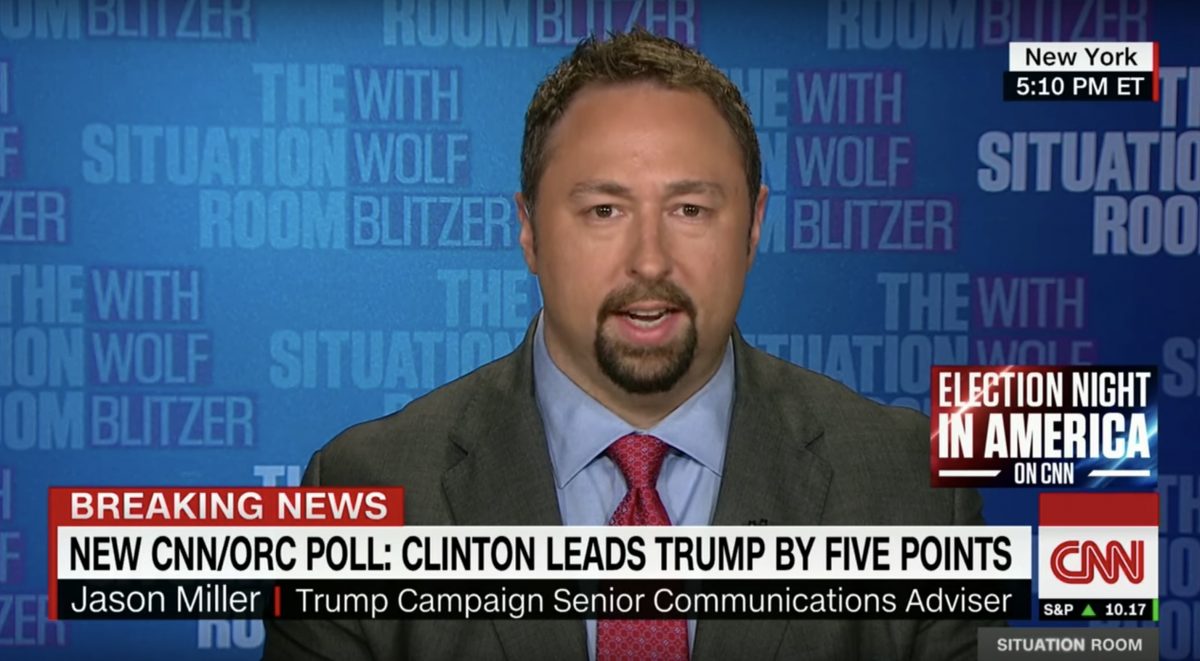 CNN commentator Jason Miller is out at the network.

Miller announced the news on Twitter: “I have decided to step away from my role as a political commentator at CNN to focus on clearing my name and fighting the false and defamatory accusations being made against me,” he wrote.

News on my departure from CNN: pic.twitter.com/IjNIgeRPRF

It was reported on Saturday that Miller was accused of drugging a woman with a smoothie to induce an abortion.

The account, first reported by Splinter, was found in court documents related to a custody battle between Miller and former Trump campaign operative A.J. Delgado. Delgado previously contributed to Mediaite.

Miller’s legal team has strongly denied the accusations found in the court filing, telling Splinter, “To be clear, there is no validity to the false accusations made in Ms. Delgado’s filing…We also know the identity of the ‘Jane Doe’ referenced in the filing, have located her, and Mr. Miller is absolutely certain that he does not know her, never had a relationship with her, and never engaged in the actions Ms. Delgado—and now you—falsely accuse him of committing.”

1) There is no validity to the false accusations made in the document Arlene “AJ” Delgado filed herself, without an attorney.

2) This “story,” replete with assumptions, misstatements and fraudulent statements was wrongfully published by the gossip blog Splinter despite the obviousness of its falsity and lack of factual support.

3) Splinter also failed to do anything to corroborate the accuracy of Ms. Delgado’s defamatory accusations, which have already been disproven by at least one reporter whom Ms. Delgado attempted to involve in her continuous attempts to smear me.

4) Ms. Delgado was previously subject to a five-year restraining order for cyberstalking… https://t.co/inlOilH3QT

5) The family court Judge involved in our case in Miami-Dade Circuit Court recently raised serious issues surrounding Ms. Delgado’s emotional and mental health. Any reporter wanting the facts about this can contact me directly.

6) I will clear my name in this matter and seek to hold Ms. Delgado, Splinter and anyone else involved in spreading these lies legally accountable.

CNN has confirmed to CNN’s Brian Stelter that Miller is, indeed, no longer with CNN.

A CNN spokeswoman has confirmed to me that @JasonMillerinDC is no longer a network commentator. Miller tweeted that he "decided to step away" from the role to fight "the false and defamatory accusations" made against him. https://t.co/YVb87qE2s5