Kirsten Powers: What Was Cain Accuser Sharon Bialek Doing Going Out For Drinks With A Married Man?

Kirsten Powers: What Was Cain Accuser Doing Going Out For Drinks With A Married Man?
Twitter share button 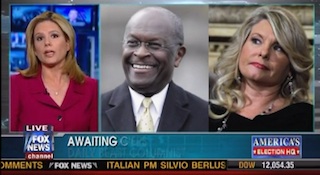 As expected, the media examination of Sharon Bialek has begun. From the moment she stepped up to that podium yesterday, every news organization around has been steadily dissecting every element of her story and character. They’ve analyzed her legal history, wardrobe, and, of course, the, uh, pronunciation of her name. Earlier on Fox News, Kirsten Powers pointed out another possible hole in Bialek’s story; If Herman Cain really tried to force her head towards his crotch all those years ago, why didn’t she beat the sh*t out of him?

Discussing the story with Megyn Kelly, Powers discussed this clear hole in the story:

“Some people look at this and they say, y’know – I don’t know what you would do, Megyn, but, if I were in that situation, if someone put their hand up my skirt and pushed my head down, someone would be in the hospital and it wouldn’t be me. Also everyone would know about it.”

Kelly played devil’s advocate, arguing that many women have been put in situations like this over the years and have been forced to learn how to just live with it and move on. Powers continued:

“I think if there’s any teachable moment in all of this, and we never talk about it, is that women shouldn’t put themselves in these positions. He’s a married man. What is she doing, what is he doing going for drinks, going back to his office, why are they in a car together?”

So, clearly Bialek is either lying, or she’s a foolish wimp.