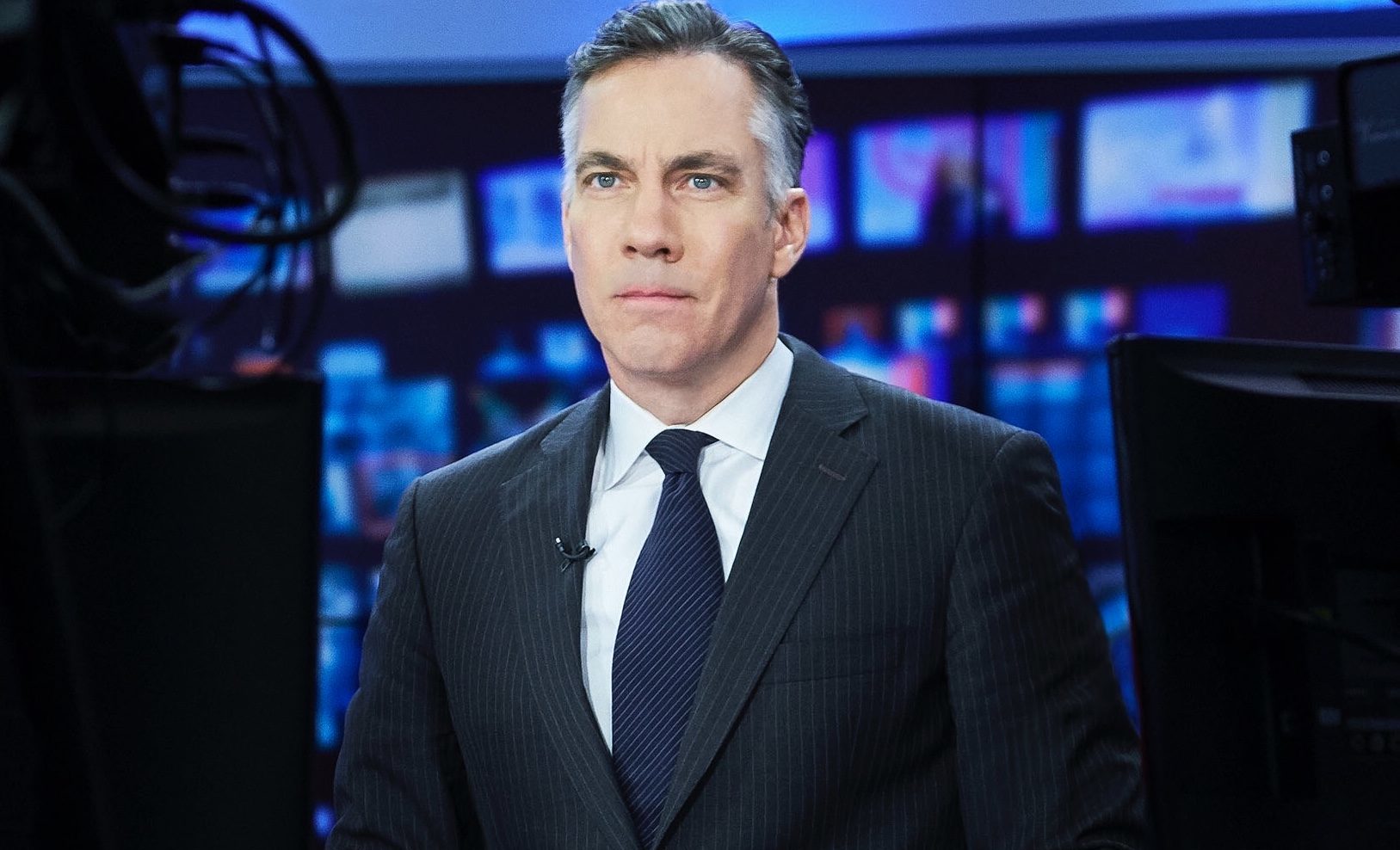 Jim Sciutto — the co-anchor of CNN Newsroom, which airs weekdays at 9:00 a.m. ET — has one of the most interesting career backgrounds in all of cable news. The network’s national security correspondent, Sciutto was a longtime foreign correspondent for ABC — stationed in Asia, Europe, and the Middle East at various points in his tenure. He also served as chief of staff for the U.S. Ambassador to China.

His years working in the state department and residing in Beijing, along with his other experiences abroad, have given him a unique perspective to draw off of for his new book: The Shadow War: Inside Russia’s and China’s Secret Operations to Defeat America. In it, Sciutto chronicles a war that many may not even realize the U.S. is fighting — one in which fellow powers Russia and China are trying to assert their dominance and supplant America as the world’s dominant nation. 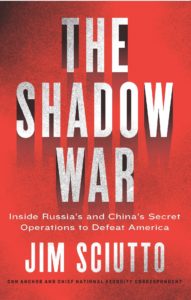 We spoke with Scuitto on Wednesday in a wide-ranging chat about the book and other topics.

This conversation has been edited for content and clarity.

Mediaite: Russia has been so much a part of the national conversation, on a daily basis, for the past couple of years now and yet, we are, according to you, completely missing the boat. Why?

Jim Sciutto: Because folks are aware of only one or two fronts of what is a multi-front war. That is one of the reasons. They are aware of election interference. They probably kind of know about Ukraine, but don’t care too much about it. They don’t know that Russia has put weapons in space. They don’t know that Russia is catching up to us on submarine technology — which is a big deal because that is an offensive strike weapon. It is a nuclear weapon to pop up off your coast and rain down nuclear missiles. It is serious stuff.

Why do we care about a country in the 21st century invading a European country? Because we’ve kept the peace for 67 years by respecting borders. And Russia has just blown through that. And our reaction to it has been so piecemeal and mealy-mouthed that Russia gets away with it.

One of the reasons why I wrote this book is that I spent years covering both Russia, and China — and the commonality just of their strategies…they are very similar. Multi-front, and then — this is crucial — just below the threshold of a U.S. reaction. Because they calculate, and they are pretty darn good at calculating this, how far they can go without making us retaliate in a way that matters.

Both of them have invaded territory. Both of them have deployed space weapons, both of them deploying better subs. Both of them steal our secrets every day although the Chinese do it better. And we kind of trundle along, and slap some sanctions here and there, and make some hyperbolic statements but don’t do anything about it.

What is the button that Russia and China would have to push to draw U.S. attention?

It’s not clear because we are kind of numb to it. We are used to being number one and unchallenged and we are the frog in the boiling water. The temperature has been going up but not quickly enough for us to react, and at the same time our leaders are not talking about it in this way.

I talked to dozens of officials, intelligence, military, diplomats, who serve — to be clear — Democratic and Republican administrations. Because this is not a political book. There is a lot of blame to go around. And they cop to it.

These are folks who served during this time and they say that we collectively, and them included, were guilty of misreading Russia and China. They talk about mirroring, imagining that Russia and China want what we want. And this goes back decades to the fall of the Wall, to China’s economic rebirth here.

CNN Newsroom is incredibly informative compared with much of what we see in the cable news landscape. I am curious how your work on this book has impacted you and your co-host, Poppy Harlow, in putting together a rundown on day-to-day basis. How putting together this show every day is impacted by the importance you clearly feel about the lack of attention that we are devoting to Russia and China.

For both Poppy and I, it is one reason we like working together is that we are both reporters first. That is where we cut our teeth, and we will always be reporters even as we are doing this show, and both of us still report.

We are still talking to sources, we are still booking interviews, and we each bring that to the broadcast, and each of us has our specialty. So, for me it is National Security, Russia, China.

It’s funny, sometimes we will have a show where the three headlines are Russia, China and Iran, and Poppy will turn to me, and she’s like, “That is your dream show.” And I’m like, “Absolutely. If you just plugged in the New York Mets as well, I would be in heaven.”

And then for her, she brings a particular business background and gets whether it is a White House economics advisor, or CEO. We each bring that in, and it is complimentary to some degree, and I think that helps us.

We come at it from that perspective and try to use what we have learned prior to this job, to add value. I feel like there are a lot of shows out there. You have to bring something that not everybody else is bringing, to stand out, and we just try to focus on being smart. Being well-informed and smart.

Let’s say your campaign to shine a light on Russia and China works, and the public, the American public, begins to demand accountability, and answers. What is it exactly they should be calling for? If you get the masses’ attention on this, what specific measure would you advocate for immediately?

So, it’s handful of things. It’s why I included a solutions chapter here, because I think people want to hear, okay that is the problem, tell us how we are going to make it better.

And don’t rely on me. I polled the folks who have been doing this every day for years, defense, intelligence, diplomacy, et cetera, and there are a handful of things that they come back to.

Two, you have to set clear red lines, as a country, that this is too far, whatever that is. Invading a sovereign European country, deploying weapons to space, popping a submarine as Russia has done off the coast of Florida, and then impose penalties that actually change that behavior.

The whole U.S. quiver on this has been economic sanctions on Russia, China, individuals, charge them, bring charges through the Justice Department, fine, have not changed any of the behaviors. So, clearly, as a country, we have not raised the cost high enough, to change behavior. So that is a consistent criticism.

Even backing up a little bit, know your enemy. Dispense with this illusion that you are going to change these places. It is a delusion. It is not going to happen. So, you got to deal with them as they are.

But then, the one that is missing, and again do not trust me on this, this is what you will hear from submarine commanders, spy plane pilots, the guys in the NSA who are fighting the cyber attacks, even company CEO’s who are getting robbed blind by China, is consistent leadership from the top, and consistent messaging. And in this administration you do not have it.

You have a president that will not call out Russia for some its worst behaviors, confronting China more, no question, but it is about consistent leadership across the board. What does the U.S. stand for? What are its red lines? Without that, if you do not have that from the top, it’s very hard to marshal all the resources necessary to fight back.

Yes. To be fair you do not hear from the Democratic presidential candidates, either. I mean, let’s talk about election security. You do not hear a lot of big picture analysis, and they should be challenged about it. And as I am talking to them on the air I am going to ask the candidates this question too.

I watched those hearings on the Hill. There are a couple [who ask the right questions]. Senator Ben Sasse, he has actually talked about these kinds of threats, big picture. You hear from some folks but certainly not frequently and not to the point where it penetrates the public eye.

The fact is that we have decent portion of the population who will not even acknowledge that Russia is a threat, or as a big threat, and will play down the election interference as just a small thing that just the Democrats want to talk about. Well, that is not true because the folks on the front lines of this, do want to talk about it.

Before you even get to the point where folks are talking about a big picture strategy, as a country, we got to agree on first principles and the facts of this.

The folks who are the specialists in National Security, they all know who the adversaries are, and what they are doing but our politicians, either for political reasons, or because they just do not see it, will not even grant the facts and that is pretty debilitating.