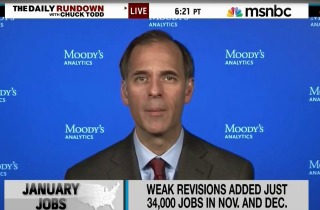 Following the release of a weak monthly jobs report in early January, Moody’s economist Mark Zandi appeared on MSNBC with Chuck Todd where he said “I just don’t believe” those numbers. Following another weak jobs report in February, and with the prior months’ report being revised upwards by just 1,000 jobs, Zandi said he still believes that the fundamentals of the economy are improving and that “the weather is all over” these reports.

“Mark, last month, you thought the December number was sort of — wasn’t going to fit the pattern that we were in,” Todd said. “But now it looks like we have an issue here, does it not?”

“No,” Zandi replied. “It was still really cold in January, really cold.”

“I think the weather is all over these numbers,” he added. “I don’t think anything fundamental has changed.”

Reuters notes that, while the jobs report was weak, construction jobs — a primarily outdoor profession — recorded their largest increase in over a year in January. “[C]old weather probably was not a major factor in January,” Reuters reported.

UPDATE: Appearing on MSNBC over the course of Friday morning, both economist Jared Bernstein and New York Times economics columnist Catherine Rampell dismissed the notion that weather was responsible for the lackluster January jobs report.